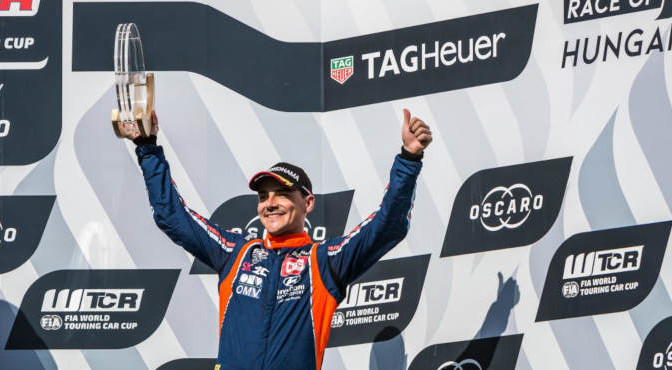 Norbert Michelisz might not be starting his home round of the WTCR – FIA World Touring Car Cup presented by OSCARO on an ultimate high following a tough beginning to his title campaign in Morocco. But the Hungarian hero won’t be giving up and here’s what the BRC Hyundai N Squadra Corse driver had to say ahead of this weekend’s WTCR Race of Hungary.

Just how good is it to race at home in WTCR / OSCARO?
“It’s quite difficult to describe with words. If I think back on my career, the nicest memories are from Hungary. First thing that comes to my mind was the first race weekend in 2011, standing on the podium was one of the best memories I have in my career so far. And of course winning one race the year after and then in 2015 was just unbelievable. This meant a lot to me and also I think these are moments in life you have to be lucky to experience.”

So how badly do you want those moments back again?
“Every year you realise it’s a tricky and difficult race weekend because of the extra pressure, because I would like to perform at my peak in every single practice session, qualifying and the races. With all of this it’s one of the most difficult race weekends for me, but getting out of the car after the last race of the weekend, two hours pass and you cannot wait for the moment to just come back again. It’s quite strange.”

The event has not always been kind to you, retiring before the start in 2016 and then being beaten into second place by your team-mate last year?
“The retirement in 2016 with the turbo failure was probably my worst weekend. Last year was okay, but a bit disappointing because I didn’t win a race. To be honest, thinking back, I know the reason, I know what I was lacking at the stranding start and I know that if this year I am in the same position, most probably I can do it better. Because of that I think of last year as a race weekend which was a strong one. I was twice on the podium so there were some nice memories in the end. But the last race win was already four years ago so I’m really missing that moment and I would like to make up for it this year, I would really like to win a race.”

So can you?
“You should never give up. But considering my years before driving at home, now I’m probably in the most difficult position with the target of winning the race. Already you could see in Marrakech we were struggling a lot, even getting into the first 10 in qualifying and this was on a track which, on paper, suits us the most. Honestly, I am a bit pessimistic regarding my chances in Hungary. But nevertheless, it’s not much we can do about the current situation. My main target is to give 100 per cent and perform at my peak. I hope in the worst case I can manage to be inside the top 10 in the Second Qualifying and on the reverse grid, if you have a good starting position on a circuit like Hungaroring, you can defend. I know the tricks and I know the places. It’s going to be really tough but there are still chances to get on the podium or maybe to win the race.”

What have you and the team been working on since Marrakech?
“We did not have track time but of course we looked deeply at the data and looked at what we can do better considering the situation. Of course the more you know the car the less possibilities you have to explore anything further, to find half a second. I think we are in a good way but first we need to see what the others have done since Marrakech and we have to wait and see until the First Qualifying to be able to predict what we should expect in terms of the race weekend.”

There are two new Hyundai-powered drivers this year in Nicky Catsburg and Augusto Farfus. What are they like to work with? Are you enjoying the extra competition?
“Extra competition is always nice and I enjoy a lot the company of Nicky and Augusto and not only because of the bar being even higher with three very strong team-mates, but because they are nice people. You can have a good chat with them. All the teams need the possibility to improve and get better and for me this is the most important way.”

You know the Hungaroring better than most but what are your two favourite corners?
“I like turns two and four. For me they are two of the most tricky corners we have in the calendar, not only on the Hungaroring but in general. You need to be very precise, you need to have 100 per cent confidence and a perfectly balanced car in these corners not to lose time. This makes it a big challenge, but when you get them right then it’s a huge amount of satisfaction.”

What’s your view on your young rival and compatriot Attila Tassi?
“I think honestly he is a very good asset to the championship. First of all because he is young, he has a very good personality, he’s fast, he’s talented. he’s brining fresh blood also to the Hungarian fans. In the end I hope him and myself can be a good mixture for the fans. i hope because of him even more supporters will come to the race weekend. I’ve known Atilla for three years now, I like him a lot. if it’s not myself or my team-mates winning races then I will also cheer for him.”

Finally, what advice would you give the new wildcard, Támas Tenke?
“The first thing I can tell him is to not over-stress even if there is a lot of attention. Of course racing in front of the Hungarian people the expectations will be quite high. With the young age he has with not a lot experience the most important thing is to focus on himself and to take the weekend step by step. I know him a bit in person but it is difficult. In 2011 I was not able to cope with this situation. But it all depends on the people around him. If he has people around him telling him the right things I think he can manage. if he will have people around him with expectations that are not realistic then it can be a problem but we will see.”