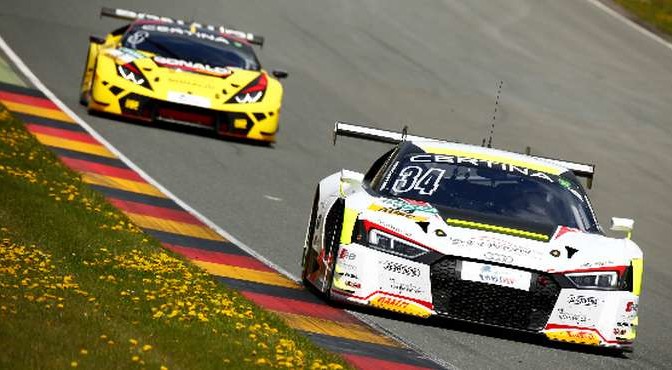 Spain´s Isaac Tutumlu and his teammate Kelvin van der Linde finished 24th in the first race of the weekend at Sachsenring. Tutumlu was running 12th when he was hit by a rival, which damaged the Car Collection Motorsport´s Audi R8 LMS. Later, van der Linde was handed a penalty for an unsafe release during mandatory pit stop.

Isaac Tutumlu didn´t achieve the goals he and his team had been working for in race one at Sachsenring, where the second round of the ADAC GT Masters takes place. The only Spanish driver in the series and his teammate South-African Kelvin van der Linde only completed four laps in FP1 but everything went according to plan in FP2 when they both finished 7th with the Car Collection Motorsport-entered Audi R8 LMS, a mere five tenths of a second off pace.

Despite Sachsenring was totally unknown to Tutumlu, he performed well in qualifying by setting a lap time of 1:20.930 in the morning. From 20th on the grid he moved up to 12th when his Audi was hit by another R8. As a result, Tutumlu dropped several places and it resulted in damage to his Car Collectoon Motorsport machine. When the window opened Tutumlu pitted to hand over to van der Linde. Only a few moments later, the safety car was deployed as a Porsche ended up in the gravel. After the safety car phase, van der Linde was gaining several places but then he had to serve a drive through after being handed a penalty for an unsafe release in the pit stop procedure. Finally, Tutumlu´s teammate took the checkered flag 24th.

“My race start was pretty good and I was running 12th after a few laps. Then, the Land-Motorsport´s Audi of Basseng and Hoevenaars hit me. Our car has suffered rear-end damage and shortly after I also ran wide as the Audi got difficult to handle in such difficult circumstances, losing four places”, Tutumlu explained. He added “Kelvin was putting in another good recovery drive but he was given a drive through penalty for unsafe release. We have a notable straight line speed deficit as the BoP isn´t particularly good for us this weekend. Anyway, we will try to improve tomorrow”.