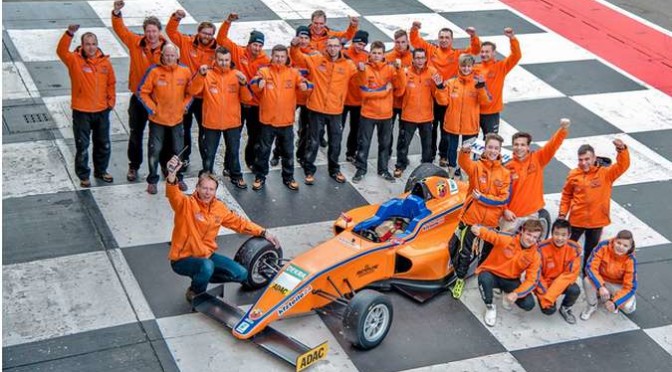 The German team kfzteile24 Mücke Motorsport from Berlin counts the days to the sharp season opening of the ADAC Formula 4 this weekend (15th to 17th of April) at the Motorsport Arena Oschersleben in the main schedule of the ADAC GT Masters. The first three out of 24 events (to watch on TV at Sport1 and Sport1+) this year will be held at this race track. The junior wrought from the German capital city that represents the colours of the ADAC Berlin-Brandenburg counts on its foursome of young drivers. The team is also engaged at DTM, FIA Formula 3 European Championship and Italian Formula 4. Three out of the four drivers are team newbies and two of them are Formula rookies. The 16 year old Mike David Ortmann from Blumberg (near Berlin) contests his second year with the Mücke team und finished rookie vice champion in the 2015 ADAC Formula 4 season. The 17 year old Swede Oliver Söderström is also experienced in Formula racing, won the last season of the Formula Renault 1.6 and was Swedish and Nordic champion as well. The 16 year old Lirim Zendeli from Bochum and the 15 year old Swiss Ricardo Feller will have their debut in Formula racing.

Question: Mr. Mücke, what are your expectations with your drivers this season?
Peter Mücke: We have a young and ambitious foursome of drivers at the ADAC Formula 4. They all are very talented and have a lot of potential. Now it is important for them to bring that in right from the beginning. Mike David Ortmann and Oliver Söderström certainly have the potential to fight about positions at the front of the field and about the title. Lirim Zendeli and Ricardo Feller will have to gather a lot of experience, make it to the finish line and develop their skills further for now. You will see their progress during the season, like it was with all our other drivers with our established and determined training the past years.

Question: Your team already trained a lot of young drivers in motor sports since the foundation in 1998. And that with a lot of success. Does that make you proud?
Peter Mücke: Seven of our former fosterlings found the way to the Formula 1 already – the four times world champion Sebastian Vettel, Pascal Wehrlein, Sergio Perez, Robert Kubica, Sébastien Buemi, Markus Winkelhock and Christian Klien. And at the DTM, Christian Vietoris, Lucas Auer, Maximilian Götz, Marco Wittmann and Bruno Spengler also learned a lot in motor sports in our team. And my son Stefan, who was the first driver of Mücke Motorsport at Formula racing, starts at the FIA Long track world championship WEC for a few years by now. Of course, this is something that makes me very proud. And we owe all that to the enthusiastic work of all our team members – from the helping hands to the engineers – that all work until the middle of the night at the race tracks sometimes. You can’t acknowledge that enough, just like the energetic help of our sponsors.

Question: David Beckmann, who starts for your team at the FIA Formula 3 European Championship and who is the youngest drivers in this series same time, has been the rookie champion of the ADAC Formel 4 last year…
Peter Mücke: That’s right. And that mirrors our philosophy. We want to provide an integrated perspective to all our drivers right from the beginning, so they can develop and make their way to professional motor sports. It’s great fun for all of us to work with young drivers and encourage them to find their way to the race tracks all over the world. The ADAC Formula 4 is a great access to achieve that, because it is rated very high and has a great level performance. It always is a big challenge for every driver and our team to score positions at the front of the field in this series.

Question: And it certainly will be like that again in the upcoming season with a field of about 40 drivers…
Peter Mücke: Right. It already starts at the qualifying, where only the best 22 drivers will qualify for the three races each weekend. Besides that there will be a qualifying race for the first time at this series, at which the starting positions 23 up to the maximum number of drivers (dependent on the track) will be determined. That means to be highly concentrated from the beginning, for the driver and the team as well. You got to get the best from the car and reduce mistakes to a minimum. Because in this big field of drivers a good starting position will be very important to score a good position. It will definitely become a very interesting and thrilling season.