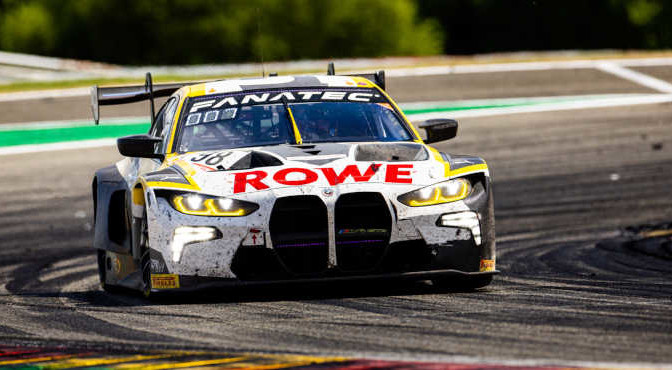 ROWE RACING gave an impressive display at the 74th edition of the 24 Hours of Spa. In a thrilling and hotly contested race, the St. Ingbert team led the field of 66 cars after six hours and was in first and second positions after a brief interruption during the night and at the twelve‑hour halfway point. After 24 hours, the BMW Junior Team, with Britain’s Dan Harper, German driver Max Hesse and Neil Verhagen from the USA, finished in fifth place in the #50 BMW M4 GT3 at the highlight of the season in the GT World Challenge Europe. BMW M works driver Nick Catsburg from the Netherlands, Augusto Farfus from Brazil and Britain’s Nick Yelloly claimed sixth place in the #98 BMW M4 GT3 after a total of 3,754.144 kilometres and 536 laps.

For long periods of time, both crews were battling for the fifth podium finish for ROWE RACING in the last five races at the classic event on the Formula 1 circuit in the Belgian Ardennes. The #98 car started from 15th on the grid, with the BMW Juniors in 20th. After a very controlled opening phase, the #98 BMW M4 GT3 reached a podium spot for the first time after 74 laps, before moving into the lead on lap 115 and maintaining that position for a very long time. The team was awarded twelve extra points for securing first place after six hours. Around 2am, the two ROWE RACING cars were in first and second positions as the race was interrupted for 42 minutes to repair some crash barriers. They were still in first and second place after twelve hours, securing another twelve points in the team standings.

The #98 headed the field for a long time on Sunday morning and was in second place around two hours before the finish. The trio would have been able to defend this position until the end but tyre damage put paid to any dreams of a podium finish. Nick Yelloly lost a lot of valuable time on the way back to the pits. It proved impossible to close the gap to the leaders as no further race neutralisation took place.

The team’s #50 car took up the battle for a podium finish however. Final driver Dan Harper was within striking distance of third place, only to suffer tyre damage as well just before his last pit stop, which cost him around 20 seconds. The BMW Junior Team finished fifth, just 14 seconds away from third place. “Although it was a good race result with fifth and sixth places for the two ROWE RACING BMW M4 GT3s, I don’t consider that it is a real reflection of our performance. The BMW M4 GT3 was very strong here and we were able to battle for the lead for the entire duration of the race,” said Andreas Roos, Head of BMW M Motorsport: “Of course, we would like to finish off such a great performance over 24 hours by standing on the podium, holding a trophy. Unfortunately, double tyre damage put paid to that for us this time. That was simply bad luck. Hopefully, fortune will be on our side next time.”

ROWE RACING was the second most successful team at Spa, scoring a total of 36 points in the team standings of the GT World Challenge Europe Endurance Cup, and is now in third place with 56 points after three out of five races. In the drivers’ standings, Dan Harper, Max Hesse and Neil Verhagen are in fifth place with 34 points, followed by their team-mates Nick Catsburg, Augusto Farfus and Nick Yelloly in sixth with 32 points.

Hans-Peter Naundorf, ROWE RACING team principal: “I am unbelievably proud of our team, as we gave another outstanding performance here at Spa. Every single team member and everyone at BMW M Motorsport worked faultlessly for the entire weekend and provided impressive confirmation of our intention to always be battling for podium spots at the major 24 hour races. One damaged tyre on each car was all that prevented us from turning this aim into reality. Those were the only problems we had with our BMW M4 GT3 during the entire race weekend. They occurred at a very late stage and after that it was not possible to neutralise the race and we were unable to make up for lost time. That cost our crew in the #98 the chance of finishing second, and the BMW Juniors could have finished third on its Spa debut without the tyre problems. In the end, we recorded two great finishes in fifth and sixth. This might feel like a disappointment initially, as we were extremely competitive and led the race for a long time. Congratulations to our drivers; they were very disciplined in extremely challenging conditions, followed all the instructions and did not receive one single penalty in 24 hours.“

Dan Harper (#50 ROWE RACING BMW M4 GT3): “Our first appearance at the 24 Hours of Spa went well. Fifth place is a good result, even though it is a bit painful to think that we could even have finished on the podium. None of us made any mistakes, and thanks to ROWE RACING and BMW M Motorsport we have once again learned a lot. I am simply grateful for the opportunity to participate in races at this extremely high level.”

Nick Yelloly (#98 ROWE RACING BMW M4 GT3): “Our BMW M4 GT3 was very competitive for the whole weekend. We would definitely have made it to the podium if the tyre gods had just been on our side at the end. That’s just how it is at this race. If you still reach the top six despite this bad luck, you’ve done a good job. Many thanks to everyone – including the engineers in the background, who made some very good strategic decisions. We’ll get that podium next time.”