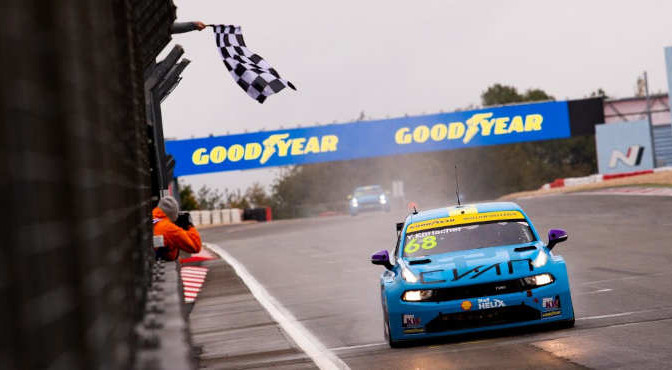 The Cyan Racing ace slipstreamed his Lynk & Co 03 TCR ahead of Girolami’s ALL-INKL.COM Münnich Motorsport Honda Civic Type R TCR on the long Döttinger Höhe straight at the end of the first lap of the legendary 25.378-kilometre track to score his second win of the 2020 WTCR – FIA World Touring Car Cup season.

“It’s such an amazing feeling to win a race on the greatest track in the world,” said an overjoyed Ehrlacher, 24, who also collected the TAG Heuer Best Lap Trophy. “I can’t believe we won on the Nordschleife in those conditions. It’s the best win of my career, absolutely insane. It’s good for the team and for the drivers’ championship.”

Thed Björk completed a Cyan Racing one-two after passing Girolami on Döttinger Höhe on the second lap, with Attila Tassi inheriting the final podium position from his penalised ALL-INKL.COM Münnich Motorsport team-mate. Girolami was classified in P11 after his penalty was applied.

Jean-Karl Vernay (Team Mulsanne Alfa Romeo Giulietta Veloce TCR by Romeo Ferraris) held off Yvan Muller’s Lynk & Co to finish seventh and win the WTCR Trophy. Tom Coronel was eighth in his Comtoyou DHL Team Audi Sport Audi RS 3 LMS, despite having started fifth on the grid. The Dutchman lost ground when he slid into the gravel at Aremberg on lap one.

Tiago Monteiro placed ninth in his Honda as Santiago Urrutia’s Lynk & Co completed the top 10 from the back of the grid, ahead of Girolami. Nathanaël Berthon was P12 in his Comtoyou DHL Team Audi Sport entry, in front of the CUPRAs of Bence Boldizs and Gábor Kismarty-Lechner.

WTCR Rookie Driver award contender Gilles Magnus, who is competing with the support of the Belgian federation’s RACB National Team initiative crashed out on lap two in his Comtoyou Audi.

More funds raised for WTCR’s #RaceToCare
WTCR Race of Germany provided another opportunity for funds to be raised for the WTCR promoter Eurosport Events’ #RaceToCare campaign, in support of the FIA’s #PurposeDriven movement, in the fight against COVID-19. More information: https://www.fiawtcr.com/race-to-care/

RACE WINNER QUOTES
Race 1: Esteban Guerrieri (ALL-INKL.COM Münnich Motorsport, Honda Civic Type R TCR)
“It’s never easy at this track. There are so many situations that can hurt you. It’s between being confident and not over-confident. At the start, I followed Yvan and I had an idea from last year where the grip might be in other sections and the part where I could attack a bit more. I saw Yvan braking on the inside a bit early so I tried around the outside, I didn’t know what was going to happen. Then we went side by side out of that corner and very fair going down the hill, the Yvan lifted so basically it was a very fair move. After that to be honest I really pushed on that first lap because I needed to make a gap because we believe the Lynk & Cos are quicker down the straight. I went to the grass in one section, I hit a kerb in another corner somewhere, so it was quite a crazy first lap. I have to say, probably a bit too much. But then after that I created a gap and could with experience from the first lap plus the gap I created I could kind of control it. It was mega, really nice to again win at the Nordschleife, so I’m really happy.

Race 2: Yann Ehrlacher (Cyan Racing Lynk & Co, Lynk & Co 03 TCR)
“Definitely it was a really good race for us. The start was not bad even if it was behind the safety car. I was a bit cautious in the first few corners and the first part of the Nordschleife because the conditions were changing quite quickly on this long track, then I just prepared my move on Bebu at the end of lap one. And on lap two I pushed like hell to make a big lap and definitely that was one of the craziest laps of my career. Then on lap three I was just managing the gap, and here we are leading the championship and winning this race, which is one of the craziest I have ever done, so I’m really happy about that. Honestly, the feeling we had out there was absolutely insane, not even comparable to something we have on other tracks. It’s like you are driving on the edge if you make a 30cm mistake on your line or you are off on your braking. The conditions are changing corner after corner, drier, wetter and so on. It’s absolutely insane.”