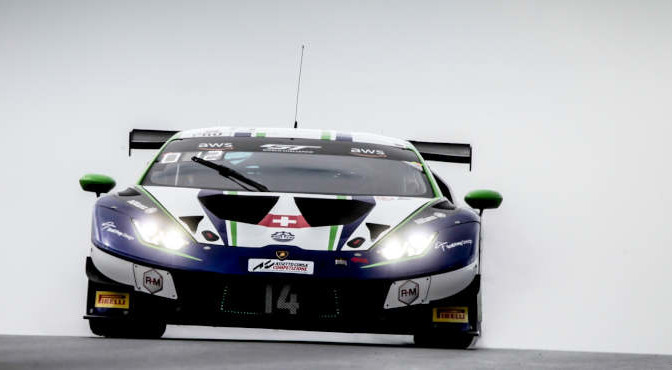 Grenier booked his maiden series pole by leading the way in Q1, despite ending the session in the gravel, while Siedler prevailed from an ultra-close Q2 to lead a front-row sweep for the Emil Frey squad.

Both sessions were staged in damp conditions, though with no rain falling after the start of Q1 the lap times came down throughout. Grenier moved into top spot with nine of the 20 minutes remaining in his qualifying segment, setting a series of quick laps to establish a useful cushion at the top of the order.

He looked set for a comfortable pole, but there was drama during the final moments when the Canadian slid into the gravel. With the #88 AKKA ASP Mercedes-AMG of Timur Boguslavskiy also spinning the red flag was waved, ending Q1 with a few minutes left on the clock. The stoppage also meant that both drivers had their best times cancelled, but Grenier’s second-quickest effort of 1m43.626s was still good enough for pole.

Louis Machiels will start race one at the head of the Pro-Am order in the #52 AF Corse Ferrari. The experienced Belgian was 17th quickest overall, two places clear of the rival #93 Sky Tempesta Racing Ferrari of Chris Froggatt.

The second session was considerably closer than the first, with Siedler booking pole for race two by just 0.036 from Albert Costa in the sister #163 Emil Frey Lamborghini. Siedler’s 1m42.747s lap capped an outstanding showing by the Swiss squad, which had never previously scored an overall pole position in GT World Challenge Europe Powered by AWS competition.

Kelvin van der Linde will line up third for the second contest after matching Tomita’s effort in the #31 Belgian Audi Club Team WRT entry. Christopher Haase took fourth in the #25 Sainteloc Racing Audi, while Jules Gounon completed the top-five in the #107 CMR Bentley.

Both of this weekend’s one-hour races will take place tomorrow (26 September), with Emil Frey Racing enjoying two shots at its maiden Sprint Cup victory. The first will see Grenier starting from pole at 09.00, while Siedler will lead the field away for the second contest at 13.45. All of the action will be streamed live on the championship’s official website and Facebook pages, as well as the GT World YouTube channel.