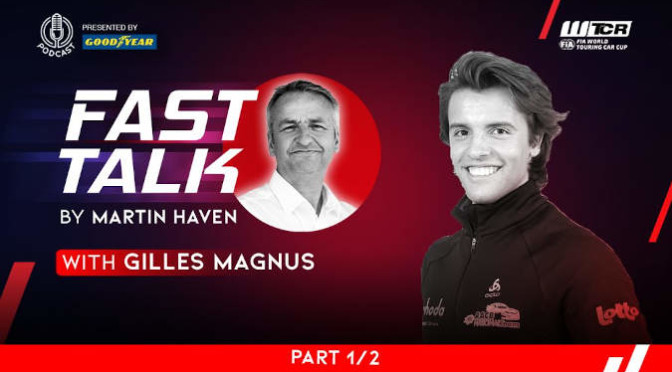 In this week’s WTCR Fast Talk podcast presented by Goodyear, host Martin Haven speaks to Gilles Magnus, the 20-year-old Belgian who is stepping up to the WTCR – FIA World Touring Car Cup this season as a contender for the new Rookie Driver Award.

With the support of the RACB National Team, the talent search and development programme from Belgium’s national ASN, Magnus had been set for a second season in TCR Europe. But with WTCR switching to a six-event, Europe-only format for this season in response to the coronavirus pandemic, the opportunity arose for Magnus to graduate to the TCR category’s top tier.

Driving a Comtoyou Racing Audi RS 3 LMS, Magnus follows fellow young guns Mikel Azcona, Luca Engstler and Attila Tassi by graduating from TCR Europe to WTCR when he will be eligible for the new-for-2020 Rookie Driver Award. It’s for drivers under 23 on 1 January 2020 who have not taken part in more than three WTCR or FIA World Touring Car Championship events previously.

Magnus has been able to register as a full-season competitor after the FIA re-opened WTCR registrations for a limited period amid growing interest from drivers. His status as a third Comtoyou Racing driver is permitted under the terms of the sporting regulations, which allow two-car teams to expand to a three-car line-up if they include a rookie racer.

In the first of two WTCR Fast Talk podcasts presented by Goodyear, Magnus explains how his career began racing go-karts indoors with his father and older brother followed by a rise up the ranks in Belgian karting. He talks about his successful move to French Formula 4, the jump up to Formula Renault 2.0 NEC and time spent racing in the VdV series.

“We all had the same passion for racing, we started when we were quite young doing indoor karting and outdoor karting,” Magnus recalls. “My brother got some nice results in karting, although he didn’t continue, he put some fire in me because you always want to compete against your brother.

“I was about eight years old when we started and had to drive with the slower karts, the kids karts, but I didn’t like that. I didn’t have the height to go to the bigger karts but finally, after some discussions with the indoor karting people, they let me in the big karts and I remember the speed was magnificent. This was the moment when I thought I want to grow in the sport and do this all my life. They were only going 50 but it felt like 300kph.”

While his graduation to outdoor karting aged 11 as the 2010 Belgian Indoor Karting champion was tough at first, something Magnus puts down to his later-than-normal start, he soon adapted and went on to compete successfully at international level guided by Franky Saeys.

He moved to French Formula 4 for 2016, took a podium treble during his second weekend on the Pau street circuit and won at Le Mans, all new tracks which he was able to master thanks to his ability to “adapt real quick to new situations”. He was equally successful in Formula Renault 2.0 NEC in 2017, when he demonstrated a tremendous resilience during the Spa-Francorchamps round.

After crashing at Raidillon at nearly 200kph in the first race following contact with a rival, Magnus was unconscious for two minutes, badly bruised and nursing a break in his upper leg. Mindful the title would be lost if he couldn’t race the next day, Magnus fought through the pain barrier, while his mechanics worked through the night to build up a new chassis. Heroically he won to keep his title dream alive up until the Hockenheim finale, only to lose out by two points following a tough season-closer with an older, uncompetitive chassis.