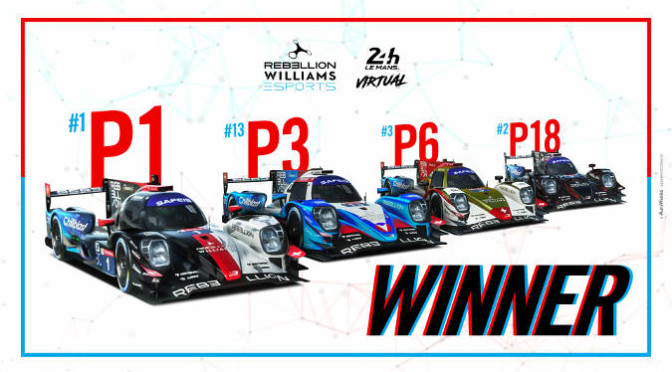 The REBELLION Racing x WILLIAMS Esports partnership proved to be successful during the Virtual 24 Hours of Le Mans. The synergy between the experience of Endurance racing and the mastery of the digital platform enabled REBELLION WILLIAMS ESPORTS to triumph at the end of an historic race.
With four cars driven by the world’s elite in endurance and sim racing, victory was the ultimate goal for this first virtual twice-round-the-clock.

After a very tight qualifying session, ORECA 07 N.3 finished on the second row of the grid, ahead of N.1 in eighth place, N.13 in fourteenth and N.2 in twentieth. Arthur Rougier, Raffaele Marciello, Agustin Canapino and Bruno Senna are the first to take the start of the race on Saturday 13 June at 3pm.

In the first few laps, the rebels were particularly swift and set off in pursuit of their predecessors. The pace continued to improve and Agustin Canapino, on REBELLION N.13, set the fastest time of 3:26.697 on lap 14.

After 5 hours, the four REBELLION WILLIAMS showed up in the first lines of the ranking. The race was then neutralized by a red flag. The Rebells took the opportunity of this restart to play the leading role. Shortly after midnight, Raffaele Marciello and the REBELLION N.1 took the leadership. Louis Delétraz, Nikodem Wisniewski and Kuba Brzezinski took turns at the wheel of the prototype, running lap after lap in first position and getting ahead in the competition.

The second red flag interrupted the dominance of the crew. The gaps were reduced to nothing, but REBELLION WILLIAMS ESPORTS still led with its two cars N.1 and N.13 at 3 hours from the finish. The restart was just a simple formality for the crew who had the victory in their sight.

After 371 laps covered, including 224 ahead, REBELLION WILLIAMS ESPORTS won the first edition of the Virtual 24 Hours of Le Mans.

REBELLION Racing showed its ambitions for the 88th edition of the 24 Hours of Le Mans, which will take place on September 19th and 20th, 2020.

“We are very happy to have won the virtual Le Mans 24 Hours! This is a historic race that will go down in the annals of endurance racing as the first virtual race of the 24 Hours of Le Mans. We are proud that an Endurance team such as REBELLION Racing has written this page of history! A big thank you to our friends at WILLIAMS ESPORTS who, thanks to their work and experience, made it possible for us to win! ”

Alexandre Pesci, President and Owner of REBELLION
“We are extremely proud and happy to have won these first Virtual 24 Hours of Le Mans. A big thank you to the whole team who worked hard for several weeks to achieve this. REBELLION Racing dedicates its victory to the Princess Charlene of Monaco Foundation. This result is a great way to show our ambitions: to win the Le Mans 24 Hours in three months!”

Calim Bouhadra, CEO of REBELLION Corporation
“The Virtual 24 Hours of Le Mans is an historic event, the first of its kind – and maybe the only one that will ever be held with this level of commitment from both the real and virtual racing worlds. Our collaboration with REBELLION RACING was perfect for this event, bringing both our experience as professional racing teams, and combined expertise in endurance and sim racing. We are enormously proud of not just the victory by the #1 car, but the performance, attitude and spirit shown by our whole team. You only have to look at the entry list to see the size of the challenge we faced, but our drivers especially were heroes and they all deserve to take great pride in the parts they played. At Williams, we have been building our place in esports for more than two years now, so this is a great reward for that commitment and a sign of the bright future that lies ahead of Williams Esports.”

Steven English, Head of Esports of WILLIAMS Racing
“We joined forces with Rebellion with the intention to fight for the win, but even I was not expecting to see three cars fighting in the top four after 20 hours. I’m not surprised, after the amount of work put in by everyone in our combined team. I can only say that this result is the price of all the effort we made together and I’m very proud of the whole team. One of the best moments in my 10 years of sim racing.”

Javier Guerra, Esports Coordinator of WILLIAMS Racing
“I can’t believe it! I’m very happy to have won this first edition of the Virtual Le Mans 24 Hours, especially with the REBELLION WILLIAMS Esports team. I would like to thank my team-mates, engineers, all the staff as well as the team manager and all those who contributed to this historic victory. P1 and P3, it’s incredible for the team!”

Louis Delétraz, ORECA 07 N.1 driver
“We put in so much preparation into this one and it’s amazing to see it all pay off. All of the guys drove an amazing race and we kept cool under all sorts of pressure. I’m really proud of what we achieved as a team, couldn’t be any happier right now.”

Kuba Brzezinski, ORECA 07 N.1 driver
“I’m really very happy! I know all the efforts made by REBELLION and WILLIAMS to get here. With Louis, we wanted to perform like Kuba and Nikodem. We did our best and the work paid off! I’m really happy with this race and this victory.”

Raffaele Marciello, ORECA 07 N.1 driver
“The race went really well. Our main goal was to stay away from the troubles and keep a decent pace. At the end it was quite stressful when I had to save the fuel, but with help from our race engineer it was much easier. Thanks to the whole team for this, we achieved a really big thing together!”