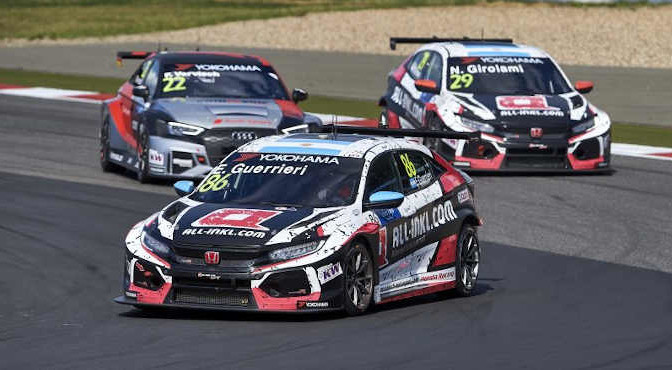 Esteban Guerrieri arrives in China with a 24-point advantage in the Drivers’ Championship while the combined efforts of himself and Nestor Girolami have pushed ALL-INKL.COM Münnich Motorsport into a 73-point lead in the Teams’ standings.

Esteban has finished on the podium on seven occasions in his Civic Type R TCR – more than anybody else – and won twice; showing a level of consistency that has been unmatched.

Significantly, he triumphed in the wet on World Touring Car racing’s first visit to Ningbo in 2017 and twice finished on the podium for Münnich last year.

Unfortunately, his task has been made tougher due to a three-place grid penalty for Race One carried over from Vila Real, where he suffered contact with another driver.

Team-mate and fellow Argentinian Nestor remains the only driver this season to record back-to-back wins, thanks to his double victory in Hungary.

He sits fourth in the points and, like Esteban, was a race winner at Ningbo in the WTCC on his only previous visit in 2017.

Tiago Monteiro was the big winner last time out on the streets of Vila Real as he triumphed in front of his home crowd to make KCMG the first Asian team to win a WTCR race.

The Portuguese ace, who became the fourth driver to win a WTCR race in a Civic Type R TCR, has never raced at Ningbo, so heads into Friday’s opening practice session eager to get to grips with the challenging four-kilometre circuit.

Team-mate Attila Tassi became the youngest driver to score a WTCR pole position in Vila Real and, like Tiago, heads to Ningbo with no previous race experience from the circuit.

Having achieved a career-best fourth-place finish in Germany, the 20-year-old Hungarian is aiming to continue his rapidly-improving form in China.

Ningbo hosts three races; the opener on Saturday plus two more on Sunday. The track action begins on Friday with the first of two free-practice sessions.

Esteban Guerrieri 86
“The summer has felt like a very long time to be out of a racing car, but I’ve had some time to re-energise and I come to China feeling very good about the rest of the season. I’ve always gone well at Ningbo. I won my first race there in 2017 and was on the podium twice last year with the Honda; plus we’re working better as a team now than we were 12 months ago, so we’re all ready to attack. Twenty-four points looks like a big gap, but that can go away in just one race if you have some bad luck, so maximising the points everywhere will be critical from now on. Coming into the weekend with a grid penalty isn’t ideal, but it only affects me for one race and a big amount of points is still the aim for the weekend.”

Nestor Girolami 29
“I have fantastic memories of my one visit to Ningbo in 2017 because it’s where I scored my first WTCC victory. The two practice sessions will be very important because I’ve never driven a WTCR car, so we’ll need to work flat-out to make sure we have the best possible set-up for qualifying. Since Slovakia, I’ve only qualified inside the top 10 once, so that’s something we’ve been working hard to improve. The racing here was quite aggressive last year so if we can be ahead of all that, it would be a big help for our points situation.”

Tiago Monteiro 18
“Although I’ve been to Ningbo before, I’ve never competed there, so it will be a new experience. The weather has been quite unpredictable there over the past two years, so it will be interesting to feel how the circuit evolves from Friday practice through to the two races on Sunday, and the people who judge and react to this the best will be the ones who do very well. We have two focuses for the rest of the season; to try and repeat the results we achieved in Vila Real, which will be extremely difficult in such a high-level series, and to add as much as we can to the push to make sure that this year’s champion is driving a Honda.”

Attila Tassi 9
“It was fantastic to end the European part of the season with my first pole position – and on my first time in Vila Real too. Now I start the Asian leg of the WTCR with another track I’ve never raced at, and I’m pretty relaxed coming here. I’ve had some good time away and I feel ready to really attack the final few rounds and finish the season on a high. Ningbo is a circuit with some decent overtaking opportunities, but we’ve seen previously that the racing here is pretty aggressive, so that’s something we have to be aware of. Naturally we want to do the best job possible for the team and for Honda.”