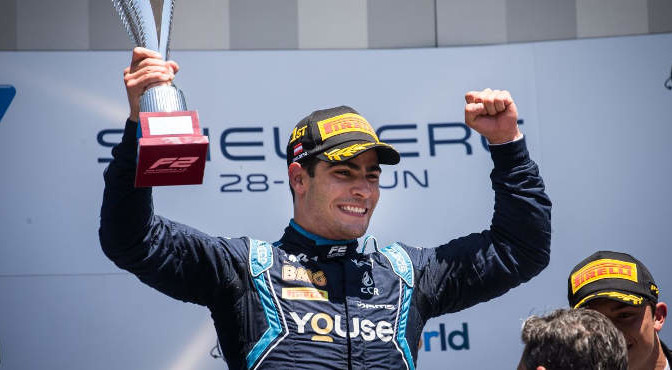 Sergio Sette Camara took his first victory of the 2019 FIA Formula 2 Championship at the Red Bull Ring in Austria, while Nicholas Latifi scored vital points to keep DAMS at the top of the teams’ standings.

“My first win in a long time is a breath of fresh air and confidence.”
“It was an up and down weekend. It started with a really bad qualifying, it’s still a mystery why we could comfortably take pole position on one track and have no pace on the next. The Feature Race was not a good day for me and the team. We could have had both cars on the podium, but we didn’t extract the potential due to a mistake I made when I touched Nicky and compromised the result of the team, spinning him and getting a penalty. But the reaction was not negative as Nicky and DAMS has forgiven me. The Sprint Race was brilliant, my first win in a long time which brings a breath of fresh air and confidence. We’re in a good position in the championship and it’s positive energy that we need to keep going forward.”

“We didn’t maximise our potential. Contact ruined my weekend.”
“The weekend started off not so bad in practice, just two tenths off in fourth. In qualifying we didn’t maximise our potential in sixth. It was really close to the front of the field so maybe I could have done a better lap. There isn’t much to say about the Feature Race, contact ruined the weekend for me. I got spun round and dropped to last, managed to recover to ninth so we definitely had the pace to fight for the podium at least. It also meant I started further back for the Sprint Race and there isn’t much you can do with the quick guys in front of you.”