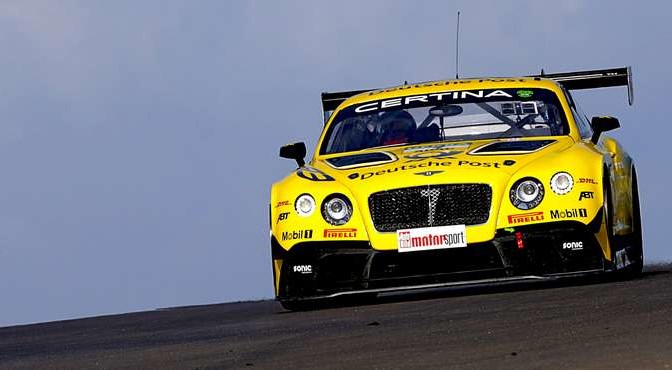 “Overall it was just one of those weekends where luck just wasn’t on our side,” Jordan reflected. “It started well on Saturday when I had a really good qualifying to put our car sixth on the grid, but one of the Mercs had a moment at the start I lost a position trying to avoid it. “From there I had really good pace, but I wasn’t able to overtake.

“So I waited for the pit window to open and pushed like hell for two laps once cars started pitting, which gave us the opportunity to jump a few cars through the stops. “Unfortunately the passenger door failed to shut, which ultimately cost us valuable track position while it flapped about – we were looking good for fifth, so tenth in the end wasn’t quite what we deserved.’”

Sunday’s qualifying in the rain didn’t go well for teammate Abt as he just lacked the traction to improve on 23rd on the grid, before Daniel was hit hard from behind on the first lap, slamming him into the car ahead and damaging the Bentley’s front spoiler and splitter.

“What a crazy day,” Jordan explained. “We started 23rd and then Daniel got banged about – I knew we were in for a tough race from the back, but when I was in 10th I thought I could make something happen. “Sadly the damage to the spoiler deteriorated as the race went on and before long the vibrations were too much – the car just wasn’t possible to drive anymore and I was forced to retire. “That was really disappointing – we were back up into a good points position, but it just wasn’t our day.

“Still, I’m really looking forward to the Hockenheim finale and to end the season off with a good result,” Jordan concluded. The Hockenheim races happen over the weekend of 1 October