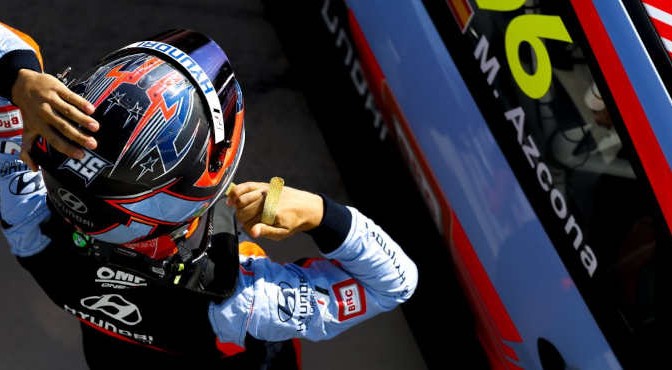 When you arrived in Pau for the first event of the season did you think at that point you could become King of WTCR?
“To be honest not. I knew at that point in Pau I had the team, I had the car, the brand to be competitive and probably be more competitive than in the past seasons. We always thought BRC was the team to beat and I was confident, but I honestly wasn’t thinking about winning the title. Having Norbi [Michelisz] in my team, he was the driver who was in the team for four years and it was my first time in the team so I knew that I would need some time to adapt myself into the new team, the car and everything. But straight away, when I finished that weekend and won my first race in Pau, I felt very strong, I felt very good. I was comfortable and happy with my situation.”

As the replacement for the legend that is Gabriele Tarquini did you feel you proved in Pau that you were the right choice for the drive?
“To replace Gabriele is something very big and to be the driver in his car, his seat, fighting for the title and to be one of the names on the Hyundai table was very important. I knew they wanted me to replace Gabriele, but they wanted good results, to fight for good things. In some aspects, I was having a little bit of pressure, let’s say. But not so much, honestly, because when I first drove the car I said to myself, ‘now we can do a good season and the results the team wants’. But it was very intense to replace Gabriele.”

When was the moment that you thought I’ve got this, I can win the title?
“It happened to me in Aragón in the middle of the season. I won that race at home, I was increasing my lead in the points and we didn’t have so many weekends remaining. So I started to think about the title, realising that I was in a good position in the middle of the season fighting for the title. I started to think more and more every day about winning the title and I was constant from that moment in Aragón.”

At what event were you most happy with your performance?
“At MotorLand Aragón because we had some good races with the Lynk & Cos still in the battle. That was a good weekend, winning one race, finishing P3 in the other race. It was a very good weekend for results, it was my birthday and many of my friends and family were there. There was extra motivation and extra support. I remember in the second race I was starting from the back with the reverse grid but then I was overtaking some cars until I finished P3. I enjoyed the overtaking a lot and, at the same time, watching my family and friends supporting from the grandstand. And as a team we did a very good job. Unfortunately, Norbi was involved in a crash with Ma Qing Hua. But in the end that weekend is the one I felt more comfortable and I liked the performance.”

You turned 26 that weekend, did you imagine you’d win the world title at such a young age?
“When I started in WTCR in 2019 for sure that was my target. But straight away when we started that season in Marrakech, I realised it would be a very difficult task for me and probably it would take a couple of years to make it. Probably I was thinking it could be possible in the fourth season. In one part it was a bit surprising for me to win the title in my first season with a new team and in a new car. But, for me, it was the best opportunity I had joining Hyundai Motorsport and I’m very proud of that. They gave me this big opportunity to be part of this impressive team and big team that is Hyundai Motorsport. It’s a very nice feeling to win the WTCR title with Hyundai Motorsport. It’s something since 2019 I was thinking about, but I was very realistic and I didn’t think I could win in a short time. It’s a very nice feeling.”

The results say so much but do you think this season you were the best driver that you have been so far?
“In my opinion I felt I did a very good season. If we look at the results, we didn’t have any problems, any DNFs, finishing the races better than I started the races. All the numbers were very positive, we didn’t have any DNFs or zero points. The best thing to fight for the title is to be very constant. I felt very good but inside WTCR there are many good drivers and it’s difficult to say I was the best driver because Norbi is a fantastic driver and there are more drivers on the grid like him. But you need to have a bit of luck and this was my year. For sure I was fast in the moments I had to be fast but in the other moments I had to be smart and finish P5, P6 or even P7 we were there. To describe the season you could say it was a smart season for us.”

Despite your success was there a weekend when everything didn’t go to plan?
“I didn’t have a really bad weekend this season but if I have to choose one weekend then it was probably Vila Real. We had to fight really a lot with the Lynk & Cos because they were very competitive there. We had to work as maximum as possible and that was very difficult. I could feel the Lynk & Cos started to be more aggressive towards me because I was the guy to beat for the title. The results were not so bad but as well wasn’t perfect like we had in Bahrain or Aragón.”

You were invited to the FIA Prize Giving in Bologna earlier this month. What was that like and who as the most famous person you met?
“I was very excited to be part of the FIA Prize Giving ceremony. We joined with [my team boss] Gabriele Rizzo and his wife and my girlfriend and we had a really good time there. I had the opportunity to see many famous faces and it was a big privilege and a big honour to be part of this famous motorsport event. I was speaking with many people, José María López for example because he is like an idol for me. When he was driving WTCC he was a legend, three seasons, three championships. I had the opportunity to speak with him, he’s a very nice guy and he congratulated me because he has been following the WTCR races. I also met Kalle Rovanperä because I am a big fan of the WRC and I take a picture with him, also with Charles Leclerc, with Max Verstappen. It’s nice because I was driving against them in karting in 2011 and my last event in karting was in the world championship driving against Leclerc. I wanted to ask him if he still remembers me or not and he said, ‘of course I remember you’. It was a very funny moment. I also met Nasser Al-Attiyah, so lots of famous people.”