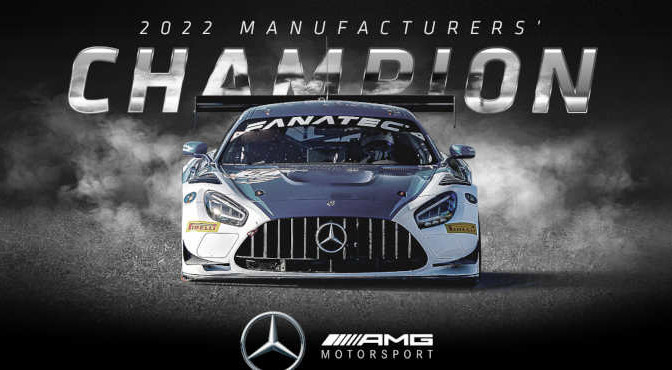 Established in 2019 and now contested by seven elite automotive brands, the standings are decided by continental Fanatec GT World Challenge Powered by AWS series in Europe, Asia, America and Australia. Points are accumulated by GT3 entries in each class, with the final allocation depending on the duration of the race and the number of competing customer cars.

Though the campaign officially concluded with last weekend’s Fanatec GT World Challenge Australia Powered by AWS finale at Adelaide Parklands Circuit, Mercedes-AMG had already wrapped up the global title with a round to spare. As such, the trophy was presented to Stefan Wendl, Head of Mercedes-AMG Customer Racing, during last month’s SRO Motorsports Group Awards in London.

The Affalterbach brand has now amassed four successive global triumphs, though 2022 was a fiercely contested campaign that featured a record-equalling number of manufacturers. Indeed, Mercedes-AMG only topped the standings on one of the four continents, with the consistency of its customer squads across the globe proving decisive in retaining the crown.

Audi Sport was the best-scoring brand in Europe, overturning Mercedes-AMG’s traditional dominance of its home continent. The Ingolstadt marque achieved 13 wins across the Fanatec GT World Challenge Europe Powered by AWS season, including a maiden Silver Cup triumph at the TotalEnergies 24 Hours of Spa.

Porsche led the way in Fanatec GT World Challenge Asia Powered by AWS, which made a welcome return to action this season following a two-year hiatus due to Covid-19 travel restrictions. Ferrari finished a close second, its best continental finish of the campaign, with Mercedes-AMG securing third.

It was on the American continent that Mercedes-AMG enjoyed its best showing, topping the table in the only series where Audi Sport was not present. BMW finished with the second-best points total in the U.S. championship, its standout showing of the season, with Lamborghini taking third spot.

Audi Sport capped an outstanding year Down Under by topping the standings in Fanatec GT World Challenge Australia Powered by AWS after a close-fought battle with Mercedes-AMG. The two German marques were comfortably clear of the opposition, with Lamborghini once again completing the top three.

Despite leading the way on two continents, Audi Sport could not overcome Mercedes-AMG this season, ensuring that the Fanatec GT World Challenge Powered by AWS manufacturers’ crown remains in Affalterbach for another year. Ferrari secured third spot followed by Porsche, Lamborghini, McLaren and BMW M. The 2022 season saw a total of 51 races staged across 29 weekends, establishing a new record for the global concept.

The Fanatec GT World Challenge Powered by AWS success concludes a glittering year for Mercedes-AMG and its customer squads. Akkodis ASP earned four titles in Europe, including the overall teams’ and drivers’ crowns, and took outright victory at the TotalEnergies 24 Hours of Spa, the first for a Mercedes-AMG entry since 2013. SPS automotive performance added the Fanatec GT Endurance Cup teams’ crown in the Pro-Am class, as well as Bronze Cup honours at the TotalEnergies 24 Hours of Spa.

In Asia, Triple Eight JMR clinched the overall GT3 teams’ championship, while its duo of Jefri Ibrahim and Nick Foster earned the Pro-Am drivers’ crown. There were no titles in America, but race wins in the Pro and Pro-Am classes for Winward Racing and CrowdStrike Racing by Riley Motorsports respectively ensured that Mercedes-AMG topped the continental standings. In Australia, there were class victories for Triple Eight JMR, RAM Motorsport and Harrolds Racing during a closely contested season.

Mercedes-AMG also wrapped up the Intercontinental GT Challenge Powered by Pirelli manufacturers’ title with a round to spare and is guaranteed to add the drivers’ crown at this weekend’s season-closing event, the Gulf 12 Hours (9-11 December). This sets a high bar for 2023, and adds extra motivation for its rival manufacturers as they seek to end the Mercedes-AMG run of success in global GT racing.