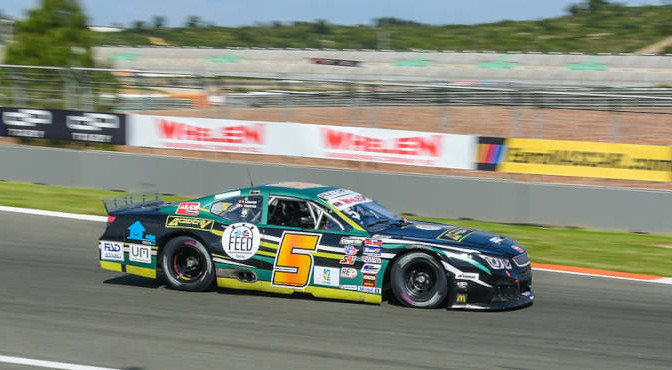 Vladimiros Tziortzis extended his contract with Academy / Alex Caffi Motorsport for the 2023 NASCAR Whelen Euro Series season. The first ever Cypriot in EuroNASCAR racing will make the step up to EuroNASCAR PRO to take on the elite in the official European NASCAR Championship. The 25-year-old will continue to drive the #5 EuroNASCAR FJ and hunt for points for the Italian joint venture of Federico Monti and Alex Caffi. Since joining the NASCAR Whelen Euro Series back in 2020, Tziortzis made a lot of progress to become a title contender in the 2022 EuroNASCAR 2 season, in which he finished third overall.

“My goal is to score as many top finishes as possible and bring home podiums as well as race wins,” said Tziortzis at the press conference in Cyprus. “Of course I want to win the EuroNASCAR PRO Championship and represent my beautiful island in the best way possible. What I like about EuroNASCAR are the close battles with the fastest guys in the series and I always get goosebumps when the Grand Marshal say the magical words: ‘Drivers, start your engines!’”

Now working also as a karting coach in Cyprus, the Nicosia-native got into racing when he went to the race track of Larnaca and the experience sparked his passion for motorsports. “I immediately asked my father to start karting and he said yes,” remembered Tziortzis. He started his racing career in 2004 and grabbed a total of seven titles in his karting times until 2013. In 2014, Tziortzis switched to open wheel racing before joining the NASCAR Whelen Euro Series in 2020. In 2022, the 25-year-old was among the EuroNASCAR 2 title contenders and finished third in the championship.

In his EuroNASCAR 2 rookie season in 2020, Tziortzis ended up on the podium twice and just two years later, he expanded his podium count to an impressive 15 top-3 finishes. His breakthrough moment came with his maiden NASCAR Whelen Euro Series race win at the 2022 season opener at Circuit Ricardo Tormo in Valencia, Spain. Despite breaking his hand in a violent crash at Circuit Zolder in Belgium in October, Tziortzis started in the EuroNASCAR Finals just three weeks later to score two more podium results.

Consistency is Tziortzis greatest skill and he sees himself as a determined hard worker with a perfectionist attitude. His team, Academy / Alex Caffi Motorsport, gave him the nickname “Terminator”. “My greatest strength is being fast and consistent lap by lap,” said Tziortzis, who wants to leave a mark in EuroNASCAR history. Stepping up to EuroNASCAR PRO, he will face European NASCAR racing legends from all around the world. The 2023 season will be important for Tziortzis and the whole racing community in Cyprus will cheer for the young gun, who proved to be among the strongest drivers on the grid.

A fitness enthusiast who likes to go jogging in nature and take on road trips, he will be back in action on May 6-7 when the 2023 NWES season will kick off at Circuit Ricardo Tormo in Valencia Spain. Qualifying and all races will be broadcast live on EuroNASCAR’s YouTube channel, Motorsport.tv and several TV services from all round the world.