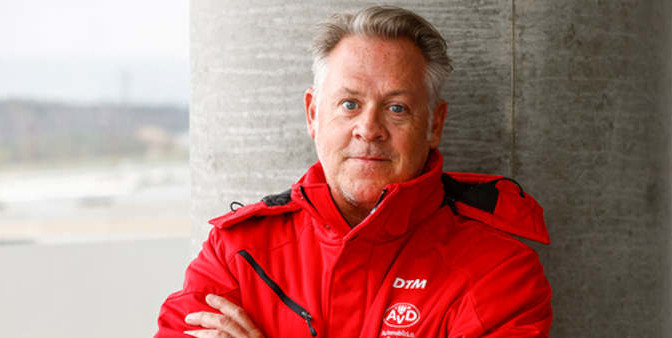 At the end of his first season as Race Director of DTM and DTM Trophy, Scot Elkins draws an extremely positive conclusion: “It was a great year!” DTM in particular, with its huge grid, posed more than just a challenge to the American. “DTM is different from all the other GT series I have seen,” says Elkins, who was also amazed by the environment of the traditional series. “The atmosphere, the vibe at each race is incredible, and the fans are great.” In the interview, the 52-year-old, who grew up not far from the legendary Indianapolis speedway, talks about the mutual respect between drivers, officials and himself, about the new camera system to detect track limit violations and about fair judgments of driving behaviour.

Seen through the eye of a motorsport enthusiast: How did you enjoy your first season in DTM with the two race series DTM and DTM Trophy you have been responsible for?
Scot Elkins: “It was an incredible year considering I was very much a “fish out of water”. I was new to DTM, my German language skills were and still are quite poor, but it was amazing to be so welcomed by the entire DTM family.”

How much potential, charisma and radiance has the whole DTM platform?
“DTM is different from all other GT series I have seen. The atmosphere, the “vibe” at each race is incredible and the fans are amazing.”

Even before the season, you had considered it a challenge to keep 27 and even more top drivers in control. How difficult has it really been?
“It was every bit the challenge I thought it would be and from my point of view, it worked out very well. I think we were able to create a mutual respect between the drivers, the officials and myself and that made working together much easier.”

You relied on close cooperation and good communication right from the start. Did that work as well as you had hoped?
“Absolutely! From everyone at ITR to the AvD team to the team managers and drivers, it was very open and positive.”

Track limits, not only in DTM, are apparently something of an epidemic in modern motorsport, on modern racetracks. What possibilities do you see to push this issue more into the background again?
“Honestly, I think it is already in the background. We made an invest in a new technology for a camera system which automatically realize track limit violations. This has calmed down the controversy a bit as with this system, we know in black and white terms if it is happens or not and we can provide photos to the driver.”

There has been criticism about the driving standards and the penalties in between. How did this criticism affect you? How did you deal with it?
“This is a topic every race director has to deal with and it is simply part of the job. I think in every case one party will not be happy, but we have to judge as fair as we can and be very clear to the drivers and teams about what the expectations are for the driving standards.”

How special was it and how much did you like working with the drivers, the teams and your Race Control crew?
“It was very special. It feels like I found a new family.”

Provided an extension, what points are at the top of your to-do list for the future?
“It is necessary to keep doing what we did in 2022 and to extend this. To involve the drivers and the team managers in the development of the regulations and to ensure that everyone is on the same page.”

Finally, two personal questions: During the 2022 DTM tour did you take a great liking to any German idiosyncrasy?
“I started using an app to try and learn a bit more of the language, and I am up to 160 words which are all related to places and restaurants! But I have always been a fan of the German culture and cannot wait to continue my education.”

And the final one: What are your plans for the winter – how will you recover from an intense season?
“Well, no breaks for me as I have an involvement in Extreme E to do as well as the start of the Formula E season in December. So no recovery!”