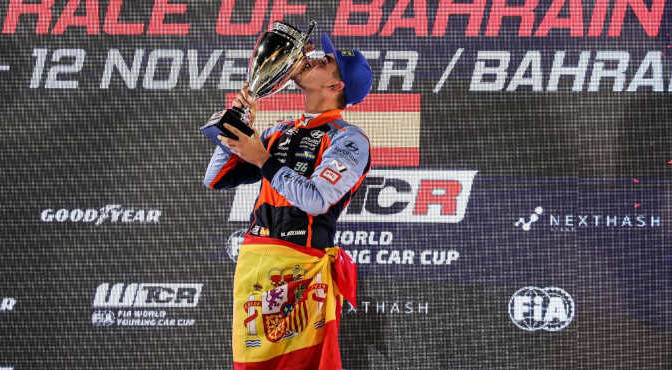 Mikel Azcona is getting ready for the biggest weekend of his career at WTCR Race of Saudi Arabia (November 25-27).

The 26-year-old is on the brink of winning the 2022 WTCR − FIA World Touring Car Cup for Drivers, an achievement that would make him the fourth and final King of WTCR following on from Yann Ehrlacher, Norbert Michelisz and Gabriele Tarquini.

With an advantage of 60 points and 65 up for grabs at the Jeddah Corniche Circuit, Azcona is firmly in the title ascendency over Néstor Girolami. And such is Azcona’s margin, the provisional crown could be his after Saturday Qualifying.

The third fastest time during the three-phase chase of the Race 1 pole position will be enough to make Azcona the first Spaniard and the third Hyundai-powered BRC-run driver to win the coveted title, regardless of how Girolami performs aboard his ALL-INKL.COM Münnich Motorsport Honda Civic Type R TCR.

“This is a very important moment of my career and I know I can achieve a great result,” said Azcona, whose Hyundai Elantra N TCR is entered under the BRC Hyundai N Squadra Corse banner. My goal is to win the world title and I will do everything possible to get this.”

The Goodyear #FollowTheLeader continued: “We have a big lead in the title standings, which gives us an advantage. We know we will have [success] ballast for the final weekend, but I think we will be good enough to fight for the top positions. It will be tough as I have never been to Jeddah before, and there was only eight or nine days to prepare at home. I have full confidence in the Hyundai Elantra N TCR and know that the team will give me a great car.”

Gabriele Rizzo, the BRC Hyundai N Squadra Corse Team Principal, said: “We can go into this weekend feeling confident, but we must still focus as anything can happen. The circuit is new, but I believe we will be able to get up to speed. We are determined to fight to the very end.”

Following in the wheel tracks of legends Tarquini and Michelisz
If Mikel Azcona is crowned King of WTCR in Saudi Arabia this weekend, he will become the third Hyundai-powered BRC driver to achieve the feat. After Gabriele Tarquini (2018) and Norbert Michelisz (2019), Azcona is going for a WTCR title hat-trick for Italy-based BRC. And if he does prevail then Tarquini and Michelisz won’t be surprised with both drivers rating Azcona highly.

Tarquini recommended Azcona to BRC as his replacement for the 2022 season following his decision to call time on his own racing career and take up a team management role within the BRC structure. “Mikel is very fast,” Tarquini said. “I was pushing Hyundai to sign Mikel because I trust on him, I was racing with him and I know he is one of the best drivers so I push very hard to have Mikel in the team, even if I didn’t know I would be working with the team because this was before. For sure if I can tell him something from my experience I will do so but, to honest, he don’t need a lot of support from me because he’s great.”

Michelisz has driven alongside Azcona throughout the 2022 season and is full of praise for his younger colleague. “He’s a tough competitor but he’s also a fair racer, which I always appreciate,” Michelisz said. “His combination of age, experience, talent and style, his assertive style is very impressive. He’s very good at understanding when to risk a lot and when to take one step back. When it’s damp, when it’s raining, when you have a slippery surface, he’s probably one of the best drivers.”

Following Qualifying from 18h30 local time on Saturday November 26, Race 1 is set to start at 19h45 on Sunday November 27 and is scheduled to thrill fans for 30 minutes plus one lap. Race 2 is due to begin at 22h15 with drivers in action for 25 minutes plus one lap. All will the action broadcast live on Eurosport, Eurosport Player and other broadcasters around the world.

WTCR − FIA World Touring Car Cup for Teams also up for grabs but firmly in BRC’s grasp, click HERE for the provisional standings after 16 rounds.