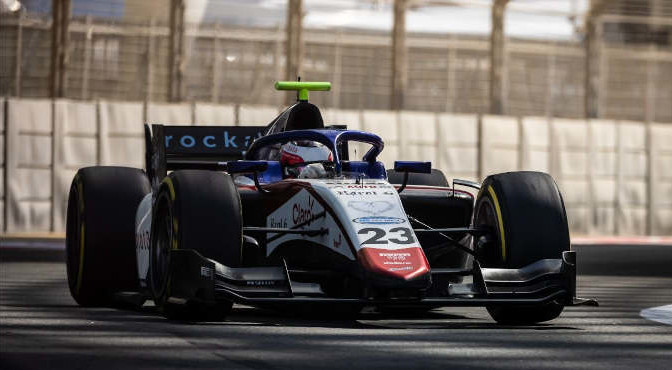 Charouz Racing System closes its 2022 campaign in the FIA Formula 2 with an unlucky weekend where both Enzo Fittipaldi and Tatiana Calderón out of the points at Abu Dhabi. In the last round of the year, held as usual at Yas Marina Circuit, the battle has been really close since Friday, with a Qualifying session that saw the first fifteen cars within 5 tenths.

Fittipaldi, who was still in the battle for P3 in the Driver Standings, was only 0.390 seconds from the pole position lap time with his 1:36.680, but that got him in P13 and therefore forced to start the Sprint Race and the Feature Race in the middle of the pack. On Saturday, a contact after the first two corners during the first lap, while he was battling to gain some positions, sent him into the barriers and out of the race.

On Sunday, he struggled to get himself closer to the top 10 and managed to close the last race of the season in P14. Similar situation for Calderón, whose pace on both days was pretty good but not enough to get her to battle for the points considering that she was starting from the back of the grid after a difficult Qualifying session.

The 2022 season goes in the books with Fittipaldi P8 in the Driver Standings and Charouz Racing System P8 in the Team Standings. The preparation work for the 2023 season will begin very shortly as the team will remain at Yas Marina Circuit for the official post-season testing that will take place on November 23-25.

Antonín Charouz, team owner
“Not the the results we aim and hoped for, especially given that we came so close to get the P3 in the Driver Standings with Enzo, but still a very positive season that brought us so many good results and several podium finishings. We should all be proud of what we achieved this year and enjoy that while keep pushing to continue from here to work for an even better 2023. I really wanna thank all the people in the team and all the drivers for their effort and I also can’t wait to focus on the next season with the three days of testing ahead of us”.

Enzo Fittipaldi
“My first season in Formula 2 is complete, it’s been an amazing year fighting for the top 3 in the championship until the last round. At the end I’ve been on the podium 6 times and I’m really happy with that. I just wanna thank the team and everyone who supported me for this great season”.

Tatiana Calderón
“The weekend started alright with Free Practice, in Qualifying to be honest I think there was more performance available but anyway it’s been the closest I’ve been to the group and I was quite satisfied with that. The Sprint Race was a bit of a disaster on my side, I didn’t have any feeling with the car and we lost temperature on the rear brakes so it was messy and we had no pace. We changed a lot of things for the Feature Race, we decide to start with the medium tyres and a lot of people did the opposite but there was no safety car so the strategy didn’t go our way and I couldn’t make up many places. I wanna thank the whole Charouz team and my sponsors for giving me the opportunity to be back in Formula 2, hopefully I’ll have another chance in the future to finally get those points”.