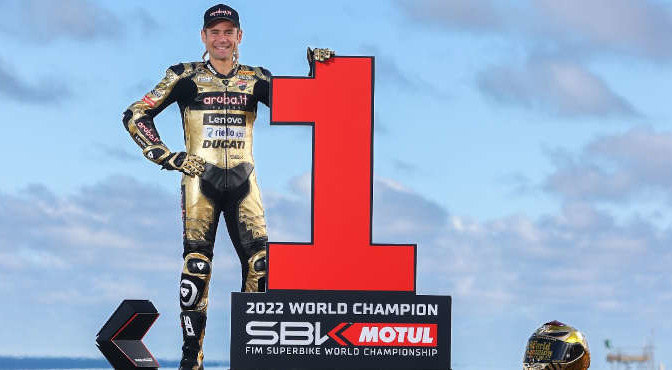 The last dance of 2022, the final roll of the dice before WorldSBK packs up after another stunning year of racing
The sun is setting on the 2022 MOTUL FIM Superbike World Championship season, although dawn is only just breaking on the final round of the season. It feels good to declare that WorldSBK has touched down in Australia at the Phillip Island Grand Prix Circuit for the Grand Ridge Brewery Australian Round, after a year off the calendar. For the final time in 2022, the media room on Thursday was awash with bold statements, of which you can find the hottest ones below!
Alvaro Bautista (Aruba.it Racing – Ducati): “We tried to celebrate as much as we could!”

“This weekend, I think, is more important than everybody thinks because they say it’s the last round, you have to be relaxed, you already won the title… but, for me, it’s important because all the data, all the good feelings we can get from this weekend, will be very important for next season because it’ll be the first round of 2023. We’ll try to be focused, try to get all the data possible, try to have as much performance as we can because it’ll be important to start next season as strong as possible.”

“I’m really excited as it’s like a second home race, with my wife being born in the town here. We spend a lot of time here; it feels strange getting out of my own bed and going to the circuit. It’s an iconic track, full of challenges; the fast and flowing nature of the corners make it one that all riders love, and it brings a lot of excitement with fourth and fifth gear corners. Being so cool, lap times will be faster as we put a lot of energy into the tyre at Phillip Island; high temperatures create more spinning with the tyres and more tyre consumption, so with more grip and potentially less spinning, the tyre should last longer, and the times should be faster. Friday is meant to be a good temperature whereas Saturday and Sunday could be anything. It’s nice that we get to revisit Phillip Island so fast after the last round with it starting in 2023. Of course, between now and then, we’ll have winter testing and try new parts and items before coming back down in more summer-like weather.”

Toprak Razgatlioglu (Pata Yamaha with Brixx WorldSBK): “It’s been a good season… I improved my riding”

“I’m happy to come back to Australia and Phillip Island; I have good memories of this track, back in 2020 on my Yamaha debut when we won! This year will be very difficult as Alvaro will be very strong and also Jonny. I remember in 2019, Alvaro was very strong with Ducati, but we’ll see as this year is different and we’ll fight with him. When we start on Friday, we’ll check the tyres as we have two new ones this weekend. Last weekend was unbelievable for me, to win everything; we’re very strong at Mandalika but this circuit will be more difficult, because we need to manage the rear tyre through the race. Maybe, the new Pirelli tyres are better than before and the feeling will be better, so we can fight with Alvaro. With the weather, it looks like it could rain, but it also looks like more fighting with Alvaro and Jonny! It’s been a good season and I’m very happy. In the second half of the season, we came back very strong, we improved the bike, and I also improved my riding. For 2023, I’ve already started training and we’ll quickly start working for next year.”

Scott Redding (BMW Motorrad WorldSBK Team): “From what I remember two years ago, tyre wear was a big factor”

“It’s definitely easier than melting on the grid! The track temperature in Indonesia was 60 degrees plus and I was just so hot, especially on the grid. We were using fans and it was actually hotter. It was worse. We come here and we’ve got different track conditions and it’s colder than when we were here a couple of years ago. We’ll do the same thing: figure what’s working with the tyres, keep an eye on track temperature and see what’s favouring which tyres. From what I remember two years ago, tyre wear was a big factor, so we need to consider that. Indonesia was the same thing, we had to be quite smart with the tyres. I hope we can work in that way and figure out what’s best. It’s quite a different track compared to what we’ve been to and also the weather. We’ve got wind normally and a colder track, which should suit me a little bit more so hopefully we can have a good weekend.”

“This is where it all started as I had my first WorldSBK race here and this is where it’s all coming to an end. I have my favourite tracks on the calendar and Portimao is one but like most riders, this is another one. I’ve really enjoyed the track as it’s so fast and flowing, also in testing. I really enjoy the natural layout of the track. This is where I got my last win in 2014 and also my first WorldSBK race here in 2011; they’re great memories that I have here. If I had to pick one memory on the spot right now, then it’d probably be the last win here in 2014 because I think I was tenth at the first corner and then ripped through the field! Similar to what Alvaro did in 2019, I just cleared off and it was one of those incredible days and one of the easiest wins I ever had.”

Oli Bayliss (BARNI Spark Racing Team): “If I can be in the top five, I’ll be quite happy!”

“I’m excited and happy to be at home! It’s been a long year, pretty good and pretty bad but mainly good. To finish the year off at my home circuit, hopefully I can get a good result. At the tracks we did a test, it was more where I took the training bike, like at Magny-Cours and Misano, it really helped. So, at a circuit I’ve done a lot of laps at like Phillip Island, it can be like those weekends. I’ve had a couple of top ten results this year but if I can be in the top five, I’ll be quite happy. I think I’m being a bit realistic; we rode here on the training bike at the start of the year and the times were quite fast and consistent. If we can put that over to this weekend, then I think we’ll be in a good place.”