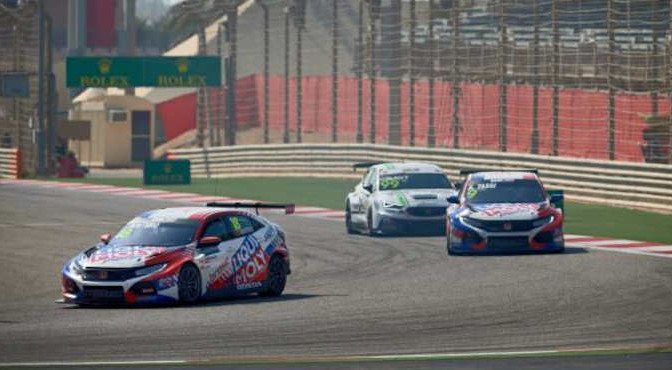 The Argentinian leapt from third on the grid into the lead at the first corner and, followed by the second-place car, made an early escape in the opening laps while others were delayed by a clash at Turn 4.

Esteban maintained the lead for the opening four laps but was then passed into Turn 1. Though he gallantly kept pace in the laps immediately afterwards, he ultimately crossed the line just over a second behind the race winner.

Second still matched his best finish of 2022, a result he also secured at the season opener in Pau, and lifted him to eighth in the standings with two races of the campaign remaining to climb more places.

ALL-INKL.COM Münnich Motorsport team-mate Nestor Girolami dug in deep in Race Two to ensure he heads to the season finale in Jeddah in mathematical contention for the WTCR title.

‘Bebu’ had a good start in Race Two, climbing to fifth after avoiding the Turn 4 melee, but his performance was affected by running in the dirty air of cars ahead.

Though he fought valiantly, he had little defence against cars with superior straightline speed and finished the race ninth.

He therefore ended the weekend 60 points behind the standings leader, with 65 points on offer in Saudi Arabia in two weeks’ time.

Tiago Monteiro had a far more encouraging run in Race Two than in Race One the night before, and spent much of the race in the same group as Nestor en route to 12th place.

Despite effectively writing Race Two off as a test session due to the set-up changes LIQUI MOLY Team Engstler made overnight after Race One, the Portuguese was satisfied with the effect those tweaks had and Tiago worked his way into the top 10 then fought hard to keep pace with the pack.

Though he dropped two places, his efforts meant he came home within 2.5 seconds of a top-10 finish.

Tiago’s LIQUI MOLY Team Engstler team-mate Attila Tassi had little in the way of luck for a second race in row.

Having started fifth, Attila again made another excellent start and was in contention for third place into Turn 4 when two cars tried to pass him on the inside into the right-hander.

Though he took avoiding action he was unable to prevent light contact with one of those cars, and was then hit by another competitor through the downhill Esses and dropped to the tail of the top 10.

Attila attempted to keep going but struggled badly with oversteer and, having pitted his Civic Type R TCR at the end of lap five, did not return to the track.

Esteban Guerrieri 86
ALL-INKL.COM Münnich Motorsport
It’s a nice feeling to be back here in the podium positions. I had a lot more confidence in the car than yesterday, mostly on the brakes, and the pace was surprisingly good. I had to play it tactically because it was so hot; it was going to be difficult for me because the cars behind had better pace this weekend. Once I’d been passed I tried to do something in the corners that followed, but once you’re behind another car you lose downforce and that’s it. This has been a long time coming but all the guys at ALL-INKL.COM Münnich Motorsport deserve this, so let’s hope this can be the foundation to finish the season on a high.

Néstor Girolami 29
ALL-INKL.COM Münnich Motorsport
It was a tough race. The car felt better in the night race when we started near the front, and it was probably the same for Esteban today; when we are in front without anyone blocking us we can just about stay with the pace, but when we’re in the pack having three or four cars in front starts to disturb the downforce and the car has no grip and no power, so you can’t defend. The championship looks very hard now but it’s not finished, so we’ll be in maximum attack for Jeddah and see where that leaves us.

Tiago Monteiro 18
LIQUI MOLY Team Engstler
Looking at the positives, the changes we made to the car for Race Two were good. It was a much better car to drive, especially in the first half of the race, even though it was hotter. But then unfortunately reality kicked in and the degradation started to come through, and from there it was just a spiral of things getting tougher. You feel the weight so much, so it kills the tyres more, so you get more degradation. After that started it was a bit of a waiting game for everyone to pass one-by-one. I tried to fight and stay in the game, but it was a hard and frustrating weekend. Hopefully the Jeddah track configuration will be better for us.

Attila Tassi 9
LIQUI MOLY Team Engstler
I had another good start and was able to attack for third place up to Turn 4, forcing a car to the inside, but there was another car using the runoff inside of that. I couldn’t see him so I started to turn and had a small touch with the car I’d been trying to pass, despite trying to adjust my line. That meant I dropped back and although I was in the pack, another driver thought I wasn’t there and completely closed the door on me. I had damage and it was a struggle just to keep the car on track because it had that much oversteer. It’s really unfortunate and I’m sorry for the team because in both races we could have scored much better points. Both times we’ve been taken out by others.