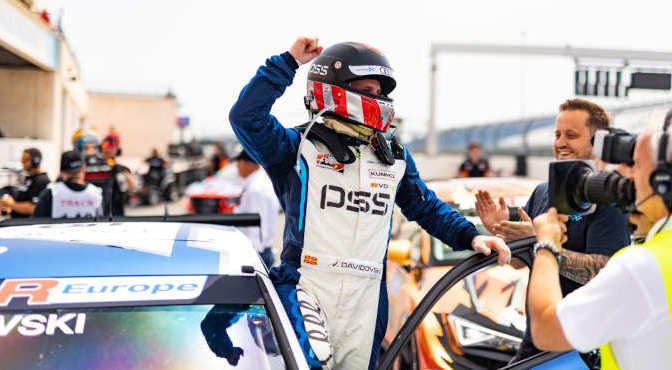 Davidovski, a 42-year-old from Macedonia, is a TCR Europe race winner and helped Comtoyou clinch the TCR Europe Teams’ title in 2022. Argentine Girolami, 30, landed the TCR Europe Drivers’ crown this season and is the younger brother of WTCR title contender Néstor Girolami.

Although their wildcard status means neither will be eligible for Drivers’ points at WTCR Race of Bahrain or WTCR Race of Saudi Arabia, while their Goodyear-equipped Audis will carry 10 kilograms of compensation weight, they will take part in the podium celebrations should they finish in the top three in either of the upcoming rounds.

Leading Swedish team Lestrup Racing will support Comtoyou in the Middle East when the Belgian squad expands from a four-car to a six-car line-up, a WTCR record.

Davidovski will carry #110 on his Audi RS 3 LMS, while Girolami will run #72 on his identical car with both being entered under the Comtoyou Racing banner.

Comtoyou Team Manager François Verbist explained: “This is a really good opportunity for Franco to show his potential which we really believe in. We’ve worked with him for one year now and he really deserved the TCR Europe title as the best and most outstanding driver. He’s also a really hard worker and deserves to have his place on the WTCR grid. For us as a team it was a wish to continue the story with him in WTCR. For Viktor, it is an ambition for him to compete in a world-level series and we are very pleased we’ve been able to make this possible. We know what he is capable of.

“Expanding to six cars will of course mean more work so the partnership with Lestrup Racing is really important. But not only are some of their guys joining our team, as part of a common discussion with Audi Sport, we are giving other Audi customers the opportunity to gain experience in a world series and we are very happy to have the support of Lestrup, an Audi customer team in the Swedish Touring Car Championship.”

Verbist continued: “We have high expectations for both events and we are ready to push to the end. We are definitely positive, coming to Bahrain with zero compensation weight and fully motivated to make the gap to Mikel Azcona as close as possible in the standings.”

Davidovski said: “For sure these races will be a very big challenge but I have been spending time working with Franco on the simulator and training every day, putting in a lot of effort to do my best. To compete in a world-level event like WTCR has always been an ambition. While I know WTCR is another step compared to TCR Europe, I have won a race in TCR Europe and nobody gives you victories for free in that series. I am grateful to Comtoyou for this opportunity, it’s lke a dream coming true.”

Girolami, who has limited experience of the 5.412-kilometre Bahrain International Circuit from last season’s FIA World Endurance Championship Rookie Test, albeit in a GT3 car, said: “This is an amazing opportunity after the incredible year we have had winnng the TCR Europe title with Comtoyou and I want to thank everybody who has made this possible. It will be a big challenge but I feel ready to make the most of this chance. Obviously it’s going to be step by step, because while the level in TCR Europe is very high right now, the WTCR has the top 10 best drivers in the world in touring car racing so it’s going to be very interesting to understand WTCR and to try to improve and learn from team-mates. I don’t have any targets, the only thing I always try to do is my best and to prepare all the events in the best way possible with lots of simulator work and training.”

Girolami’s participation at WTCR Race of Bahrain and WTCR Race of Saudi Arabia means two brothers will appear on a WTCR grid for the first time with Néstor Girolami competing in an ALL-INKL.COM Münnich Motorsport Honda Civic Type R TCR.

The younger Girolami’s entry will also ensure that three TCR Europe title winners will be in action with Goodyear #FollowTheLeader Mikel Azcona (2018 and 2021) and Mehdi Bennani (2020) also taking part in the WTCR this season.

The thoughts of brothers Franco and Néstor Girolami going up against each other in the WTCR will be included in a separate press release to be issued soon.