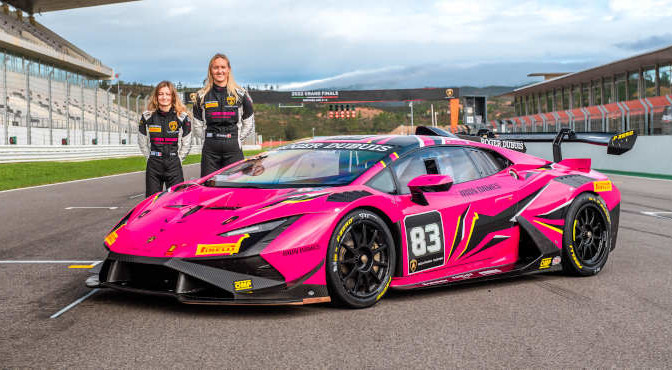 They will compete in the Lamborghini Huracán Super Trofeo EVO2, with the Grand Finals taking place in Portimão at the end of a six-round Super Trofeo Europe season touring some of the most iconic circuits across Europe.

The Iron Dames is a special project set up by entrepreneur and driver Deborah Mayer to encourage more women into motorsport at all levels, from drivers to mechanics, as well as managers. The project has achieved a number of historic moments for females in the sport, including being the first females to win numerous races and championship titles.

Doriane Pin and Michelle Gatting return to Portimão after becoming the first all-female line-up to win a race in the European Le Mans Series in October, delivering a dominant drive at the Portuguese circuit to win the LM GTE class by over a lap.

Deborah Mayer, Iron Dames Project Founder, said: “The goal for the Iron Dames Project has always been to provide more opportunities for women in motorsport and raise the profile of their participation. We have an exceptional line-up with Doriane and Michelle who are both champions in their own right. I am very proud that the Iron Dames will take part in this prestigious race, and I wish them every success this weekend.”

Iron Lynx began its story in Lamborghini Super Trofeo back in 2018; this is the first time the team will race in this championship since 2019.

The team will announce further big news about the next step in the Iron Lynx and Iron Dames journey in the coming days.