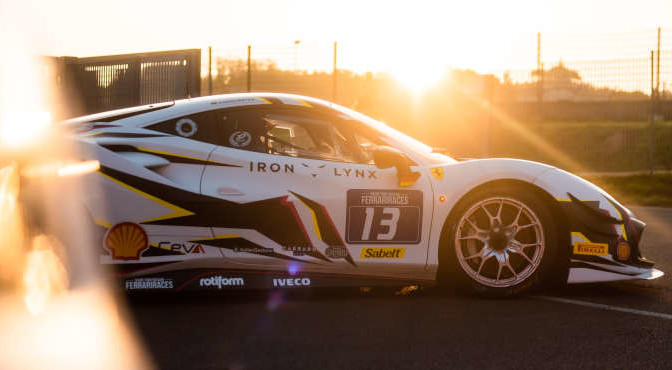 This weekend, Italian racing team, Iron Lynx took podium finishes in the Finali Mondiali Ferrari Challenge for the second consecutive season, with a win and five top-three finishes at Imola.

Iron Dame, Doriane Pin arrived at Imola as the newly-crowned Ferrari Challenge Europe Trofeo Pirelli champion, and qualified the #83 Iron Dames car in P3 for the penultimate race of the championship. She avoided contact ahead and took the lead on the first lap, dominating after a safety car period to take her ninth win of the season.

She started Race 2 from the same position, and took yet another podium by coming home P2. The Finali Mondiali on Sunday morning saw another early safety car, but Doriane set the fastest lap on her way to a third-place finish in the final Ferrari Challenge race of the year.

Arno Dahlmeyer and Nigel Schoonderwoerd lined up for Iron Lynx in Trofeo Pirelli Am, Arno taking a great P3 finish in the first race in the #13 car, with Nigel just behind in P4. Arno came home in a strong P4 in Trofeo Pirelli Am in Race 2, while Nigel recovered from a penalty to end the race P8 in class.

The safety car in Finali Mondiali brought both Arno and Nigel further up the Am order. Both drivers fought hard on the restart with Nigel taking a podium in the #89 car, finishing P2 to become Vice World Champion in Trofeo Pirelli Am while Arno ended his season with a top-five finish in class.

Claudio Schiavoni ran in the #102 Iron Lynx car in Coppa Shell, qualifying P7 for Race 1. He put in a resilient drive to move up through the field after a difficult start to finish the first race of the weekend P8 in class.

He put in a strong qualifying effort to start Race 2 from P4, and showed good pace throughout an uninterrupted race to hold his position until the end.

The Finali Mondiali in Coppa Shell saw several cars involved in early incidents, with Claudio starting from P4 again. He received contact from two cars behind, the resulting damage forcing him to retire from the last race of the Coppa Shell season.

Andrea Piccini, Iron Lynx Team Principal, said: “This weekend has been a great way to end the Ferrari Challenge season. Of course we came here to fight for the World Finals title, but for Doriane to come away with a win and podiums in all three races, shows how she is at one with the car.

“She did as well as she has done all year, the pressure was off a little bit after taking the title with two races to go. It was great to see Nigel, Arno and Claudio pushing at the front all weekend with some more podiums for Iron Lynx as well.

“Nigel did a fantastic job in the race, he’s Vice World Champion in Trofeo Pirelli Am and that’s amazing considering that’s only his third race in the Championship.”