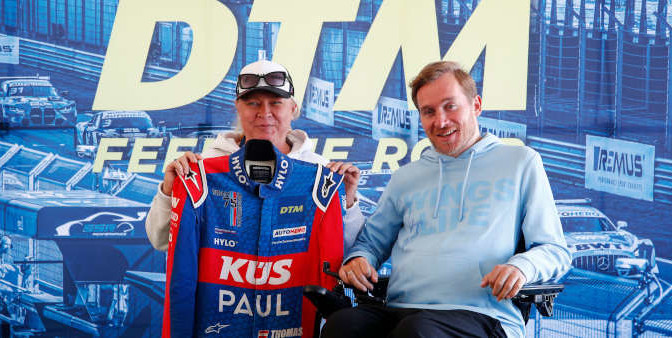 With the Hockenheimring race weekend (7 till 9 October), DTM has concluded a successful and thrilling 2022 racing season. At the occasion of the season finale, the final one of five race apparel items was handed over that were made available by the drivers during the race events and were auctioned through “United Charity”, Europe’s largest charity auction portal. The final item that was auctioned was the original race suit of Austrian Thomas Preining (KÜS Team Bernhard) with which the 24-year-old had secured the first-ever race win for Porsche in DTM at Norisring at the beginning of July and had won his home race at Red Bull Ring. Its auction brought in another 1,450 Euros. The handing-over to the winning family from the German Rhine-Neckar area was done by Wings for Life ambassador Samuel Koch on Sunday during the finale at Hockenheim. Koch fell badly during a TV show in 2010 and has been paraplegic from his neck downward ever since.

The charity partnership between DTM and Wings for Life was announced in April. In February, Gerhard Berger had won 30,000 Euros during a prime-time TV show and already donated the sum to the non-profit organisation. Next to Preining’s race suit, the championship-winning suit of ABT Audi driver René Rast from 2019 and helmets of last year’s champion Maximilian Götz (Mercedes-AMG Team WINWARD Racing), two-time DTM champion Marco Wittmann (Walkenhorst Motorsport) and South African Kelvin van der Linde (Team ABT Sportsline) were auctioned during the season as well. The total proceeds of 50,666 Euros fully went to Wings for Life.

“With our works drivers and teams, we were able to turn some profitable auctions and further activities like the Wings for Life World Preparation Run at Portimão into reality for the foundation,” Martin Tomczyk, representative brand & sports of the DTM organisation ITR looks back upon successful projects. “Paraplegia is a matter we really care about, so therefore I am happy that we with DTM were able to make a small contribution to the research.”

Wings for Life CEO Anita Gerhardter: “In the first year of the partnership, next to the great amount that was donated, increased awareness for paraplegia was generated in Germany in particular. Huge thanks to Gerhard Berger and the entire DTM environment for this effective support!” Founder Heinz Kinigadner adds: “We are already looking forward to jointly push hard for spinal cord research again together with DTM in 2023.”

Wings for Life is a non-profit organisation for spinal cord research with the aim of making paraplegia resulting from spinal cord injuries curable. Using donations, research projects with good perspectives are supported worldwide.