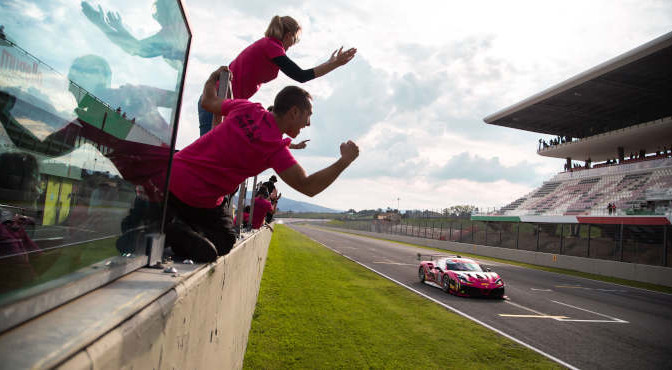 Today, 18-year-old female racer and Iron Dame, Doriane Pin, has become champion of Ferrari Challenge Europe Trofeo Pirelli with two races left of the season, marking another significant milestone for women in motorsport. Doriane started both races this weekend from pole position at Mugello, and managed the pressure to take her tenth and 11th podiums of the season.

Sunday’s third-place finish caps a dominant season for Doriane, who won eight of the first ten races, six consecutively, with ten pole positions and nine fastest laps across the year.

The Iron Dames is a special project set up by entrepreneur and driver Deborah Mayer to encourage more women into motorsport at all levels, from drivers to mechanics, as well as managers. This marks the second consecutive year where the project has won the same championship, with Iron Dame Michelle Gatting winning the title in 2021, becoming the first female in the history of the series to win the title.

Commenting on yet another success for the Iron Dames, Project Founder, Deborah Mayer, said: “Doriane just winning the championship is a monumental moment for women in motorsport, especially in such a dominant way with two races left in the season. It is also a big milestone for the Iron Dames project, as we have won this championship for the last two years running, with Michelle Gatting becoming the first woman in history to win the title in 2021.

“The Iron Dames are women driven by dreams. We have fantastically talented women working with us including our drivers, our engineers and mechanics, our sporting directors, our communications and marketing department.

“We want to inspire as many women as possible to get involved in motorsport and demonstrate that there is a place for them. A more diverse environment means more ideas and more ways to reform the sport.

“Our attitude is that if you have a dream and are prepared to work hard enough you can achieve it.

“This result makes me incredibly proud and we look forward to more success in the future.”

Doriane added: “I am feeling a lot of emotions right now, I am so happy to have won this championship, it means so much to me and we have achieved an amazing goal together with the team.

“I am very proud to be an Iron Dame and I can’t thank the Iron Dames project enough for believing in me and giving me this chance. I wouldn’t be here without their support, as it isn’t only down to me it is a real team effort. This season was very strong and the car was always prepared perfectly.

“Two women from the same team winning the same championship consecutively has significant meaning for women in the sport. Michelle Gatting won last year and I am very pleased to follow her path and demonstrate that women are also able to compete alongside men on the same track and win.”

New Ferrari Challenge Europe Trofeo Pirelli champion Doriane will compete in the final rounds of the championship at Imola from Friday 28 – Saturday 29 October, ahead of the Ferrari Finali Mondiali on Sunday 30 October, hoping to take the Iron Dames’ first world title.