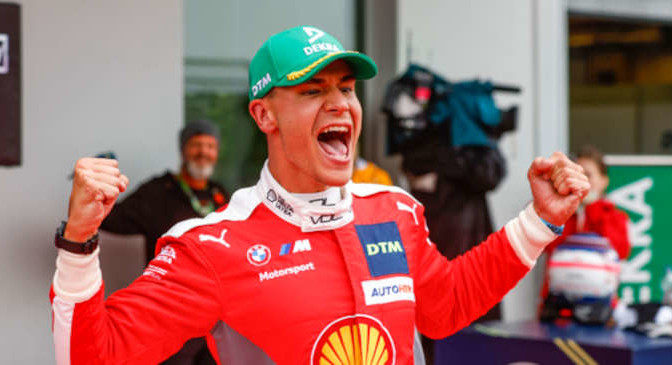 Ten drivers who mathematically still have chances of winning the title, five works drivers from as many different manufacturers who are in the inner circle of the favourites and an Indian summer with beautiful weather: anticipation for DTM Hockenheim powered by AUDI (7 till 9 October), the grand finale of a so far thrilling 2022 DTM season, is huge. During the press conference on Wednesday, the 2012 DTM champion Bruno Spengler and the top five, the drivers in the first five places of the standings prior to the final two races of the season, confirmed this. Sheldon van der Linde (RSA, Schubert BMW, 130 points), Lucas Auer (AUT, WINWARD Mercedes-AMG, 119 points), René Rast (GER, ABT Audi, 118 points), Thomas Preining (AUT, KÜS Team Bernhard Porsche, 116 points) and Mirko Bortolotti (ITA, GRT Lamborghini, 114 points) spoke about their chances and their expectations for the upcoming season finale. “We hope for fair, exciting racing until the final lap,” all drivers agreed. Unanimously, they also underlined: “Anyone of us who will win the title would deserve it.”

In his own words, points’ leader Sheldon van der Linde has “the most to lose”. Nevertheless, the South African is confident going into the weekend: “My team and I are excellently prepared.” The same can be said for Lucas Auer who still practices pit stops together with his crew on Wednesday. “Hockenheim suits me and our Mercedes-AMG.” René Rast, the only driver of the quintet having already won the DTM title three times, spent two days of testing at Hockenheim last week. “It was very much a last-minute affair, but it was very good in terms of preparation,” he said. Thomas Preining, who scored his second win of the season in front of his home crowd at Red Bull Ring most recently, is slightly surprised himself that he is among the inner circle of title candidates going into the finale: “Prior to the first season in DTM for Porsche and our team, hardly anyone had expected that.” Mirko Bortolotti, meanwhile, pointed out: “DTM is like a poker game: anything can happen. That is what I love, but also what I hate…”

In the morning, the SSR Performance team announced a driver change. Instead of Laurens Vanthoor (BEL), 35-year-old Christian Engelhart (GER) will be racing the Porsche with starting number 92.

Bruno Spengler, who will be racing a BMW 320i in DTM Classic under the BMW Group Classic entry, is also looking forward to a great season finale. “It will be a beautiful weekend with many fans, I am really anticipating it,” the Canadian said.