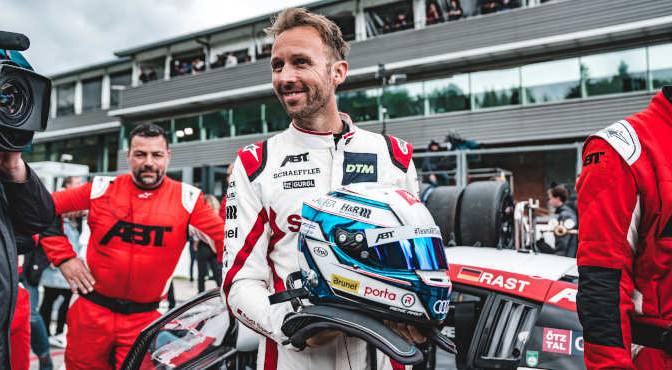 ABT Sportsline has already experienced a lot in 23 years of DTM, but the situation before the finale of the 2022 season at the Hockenheimring (Saturday and Sunday both from 1 PM CEST live on ProSieben and ran.de) is unusual even for the team around Hans-Jürgen Abt and Thomas Biermaier. The top five drivers are only 16 points apart in the overall standings before the last two races – and they all drive different makes of car. In purely mathematical terms, there are even ten drivers who can still win the prestigious drivers’ title. The teams’ and manufacturers’ championships will also be decided at Hockenheim.

For Team ABT Sportsline there is already a small reason to celebrate when the first of the two final races starts at 1:30 PM CEST on Saturday: It will be the 300th DTM championship race that the team from Kempten will tackle. ABT Sportsline is the only DTM team that has been competing in the popular racing series without interruption for 23 years and has a correspondingly large number of supporters who will be keeping their fingers crossed for the team at Hockenheim – including high-ranking representatives of its 17 partners, who will all be represented at the season finale with their managing directors or top management by invitation of ABT Head of Sports Marketing Harry Unflath.

Not only Kempten and the Allgäu region will be rooting for Team ABT Sportsline this weekend: most of the spectators in the grandstands at the Motodrom will also be rooting for René Rast and his ABT Audi R8 LMS GT3 evo II with start number 33. Of the top five favourites, Rast is the only German driver and, as a three-time DTM Champion, undoubtedly the best known. In addition, numerous Audi employees from the nearby Neckarsulm factory are expected at the Hockenheimring, who wish for one thing above all: that René Rast becomes DTM champion for the fourth time on Sunday.

The 35-year-old from Minden, who lives in Bregenz, Austria, has another advantage: he is the only one of the top five favourites who already knows how to win the DTM in the final race at Hockenheim – he has already done so twice, both times to the chagrin of ABT Sportsline, by the way: in 2017, he snatched the title away from ABT driver Mattias Ekström virtually on the home straight by turning a 21-point deficit into a three-point lead and crowning his first full DTM season with the title straight away.

Having secured his second title early in 2019, Rast engaged in a fierce title fight with then ABT driver Nico Müller at the finale in Hockenheim in 2020 to mark the end of the Class 1 era. The Swiss won the first race on Saturday, but Rast then clinched his third DTM title with a victory on Sunday.

Rast also wrote a small piece of DTM history at the end of the 2018 season at Hockenheim: he managed to set a new record with six victories in a row. After a difficult start to the season for Audi, Rast almost managed to make the impossible possible with his two wins at Hockenheim and become champion once again. In the end, he was only four points short.

After a strong first season in the GT3 race car, Rast goes into the final weekend of 2022 just twelve points behind. A total of 58 points will still be awarded at Hockenheim.

Rast (star sign Scorpio) is known for his meticulous approach to work and leaves nothing to chance in his preparations for the season finale. Last week he tested for two days at Hockenheim. On Wednesday, he will be at the wheel of his ABT Audi R8 LMS GT3 evo II himself during the roll-out at the ADAC driving safety centre in Kempten, before travelling to Hockenheim on Thursday.

There, the ABT Sportsline team has been assigned the pits directly at the pit exit by a lottery – a small advantage for the qualifying session, which is particularly important in the DTM and in which René Rast has already collected eleven additional points this year. The ABT driver is the only driver to have achieved three fastest times in qualifying in the 2022 season.

In total, he has achieved 23 pole positions in his DTM career. He celebrated 25 victories in 90 DTM races. He set the fastest race lap 14 times. 1,231 points correspond to an impressive average of 13.7 points per DTM race.

Rast can also be sure that the Audi R8 LMS fundamentally suits the Hockenheimring: Last year, his team-mate Kelvin van der Linde took first place on the grid for both races, ahead of Lucas Auer in each case – on Saturday even with an unusually large gap of 0.483 seconds by DTM standards.

And his team also has many good memories of Hockenheim. At no other race track has ABT Sportsline completed more DTM races and celebrated more successes. The team has contested 54 DTM races there so far, won 13 times, brought 46 podium trophies back to Kempten and won the DTM three times in the last race: in 2007 with Mattias Ekström, in 2008 and 2009 with today’s ProSieben TV expert Timo Scheider.

ABT Sportsline’s success story in the DTM also began at the Hockenheimring: on 28 May 2000, three yellow Abt Audi TT-Rs were lined up at the very back of the grid. The small private team was still being ridiculed at the time. But the competition soon stopped laughing: in 2001 ABT Sportsline took its first two victories in the DTM with the compact coupé, and in 2002 it sensationally won the title. Two decades later, ABT Sportsline is by far the most successful of all active DTM teams with 73 victories.

Quotes before the DTM finale at Hockenheim

Thomas Biermaier (Team Principal): “It’s almost normal for us to go into the DTM finale with title chances. But it is anything but a matter of course and only underlines how strong Team ABT Sportsline is. René’s partner wore a cap with the words ‘Trust in Rast’ at the Red Bull Ring. That will be our motto. Conversely, René can rely on us. We did everything in preparation to achieve our big goal. Everyone in the team will continue to work with full concentration in the next few days. We know that Hockenheim is a track where we can be strong. We like it, our drivers like it. It is close to Kempten and therefore like a second home for us. There will be a lot of partners, sponsors and friends on site, all coming with the aim of celebrating with us on Sunday.”

Kelvin van der Linde (ABT Audi R8 LMS GT3 evo II #3): “I love Hockenheim! I think you could see that last year when I took two pole positions and a win in Saturday’s race. I think Hockenheim suits our car and I hope to finish the season on a positive note. My personal goal is a podium. And of course, it would be nice if we could also win the team and drivers’ championships. We did everything in our preparation to be competitive at Hockenheim.”

Ricardo Feller (ABT Audi R8 LMS GT3 evo II #7): “I basically like the Hockenheimring. I think if the BoP is balanced, any manufacturer can win there – that makes it exciting for the fans, of course. I hope that we get a fair BoP, because the long straight makes me a bit worried about the top speed of the other cars. I hope that we are competitive and have the chance to fight for the podium.”

René Rast (ABT Audi R8 LMS GT3 evo II #33): “It’s going to be very exciting at Hockenheim because at least five drivers are still fighting for the championship and all the manufacturers are usually competitive there. The one who makes the fewest mistakes and has the best qualifying and races will be on top in the end. We saw last year at the Norisring what can happen at the finale. The weather can also play a role. I’ve already won the DTM title twice at Hockenheim in the last race and I always enjoy driving there. We have a great team with a lot of experience in title fights. I’m sure that everyone will keep a cool head and maybe we’ll be able to pull off a surprise in the end. I am really looking forward to the weekend.”

… Audi is only one point behind Mercedes in the DTM manufacturers’ standings before the finale and ABT Sportsline has collected 258 of 371 points (almost 70 per cent) of all points for the brand with the four rings?

… Mattias Ekström is the most successful ABT driver at the Hockenheimring so far with four victories?

… the former professional football player Andreas Görlitz visited ABT Sportsline in Kempten last Friday and took a special interest in the DTM team?

… today’s DTM series manager Martin Tomczyk contested his first DTM races at Hockenheim in 2001 with the ABT Sportsline team?

… the ABT Sportsline team is always good for surprises and in 2005 at the finale in Hockenheim it almost enabled Mattias Ekström to successfully defend his title with a clever strategy by changing the tyres one after the other, as required by the regulations at the time?

… René Rast scored his first DTM points at the finale in Hockenheim in 2016?