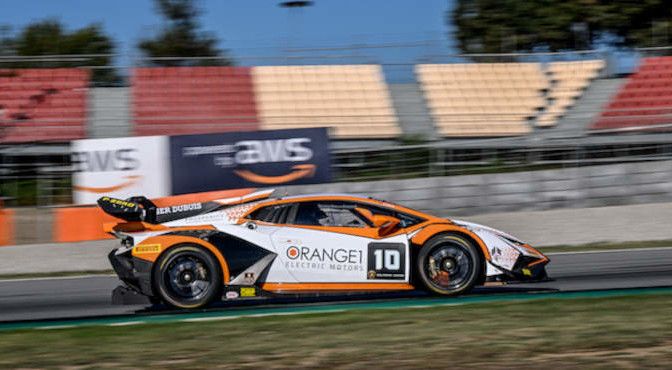 The Rexal FFF Racing Team ended the Spanish round of the Lamborghini Super Trofeo Europe 2022 at Circuit de Catalunya with a podium, an unfortunate DNF and some valuable points in view of the ever-closer championship finale. The five crews fielded at the spanish circuit did their best and tried to collect as many points as possible ahead of the sixth and final race of the year, which will take place in Portimao in a month’s time. Unfortunately, the team’s hard work could not overcome the bad luck of a weekend that turned out to be uphill from the very beginning.

In the Pro Cup, the young and talented Rodrigo Testa delighted everyone with a weekend of great performances. After finishing 6th in Race 1, he was not satisfied with the result: he continued pushing on Sunday, fighting to bring home an excellent P5, improving his result and showing everyone how quickly he is growing behind the wheel of his #10 Lamborghini Huracan ST EVO2.

Also Oscar Lee and Dan Wells had all the makings of a successful weekend in the Pro-AM Cup. After an incredible qualifying session, they ended Race 1 in P4 despite a contact with an opponent that made the second half of the race more difficult than expected. This solid result could have turned into a podium in Race 2 but, unfortunately, another contact while they were in P3 ruined their race and set them back to ninth place. They fought with determination and, although this was not enough, they demonstrated their talent on more than one occasion. The two young drivers know that this result does not define their standard of driving, and they are already ready to get back in the car to conquer the podium they deserve.

A similar fate befell Claude Gosselin and Marc Rostan in the AM Cup. After a qualifying and an excellent P5 in Race 1 that would easily have turned into a podium in Race 2, they had to end the Spanish weekend with an unfortunate DNF due to an off-track. However, this retirement does not threaten the morale of the #4 crew: over the course of these races, they have grown a lot and achieved a very good level of harmony and cooperation. This epilogue does not leave them afflicted but just hungrier, and now they are ready to come back stronger.

In the LC Cup, Luciano and Donovan Privitelio delivered an outstanding performance, taking the podium in Race 2 and giving the whole team great satisfaction. The solid pair of the #8 Lamborghini Huracan ST EVO2 seems to be never satiated with podiums and also in Spain managed to improve on the excellent P5 conquered in Race 1 with an amazing P3 in Race 2. The two drivers are now focusing on the final phase of this hard-fought edition of the Lamborghini Super Trofeo Europe, in which – and we can now say it – they have been true protagonists in their category.

Also competing in the LC Cup was Kumar Prabakaran. At the wheel of the #72 car, the Malaysian gentleman did a good job and improved on his solid P8 in Race 1 with a well deserved P7 in Race 2. His great determination is rewarding him with good results and, with the support of the team, he’s getting better and better behind the wheel of his car.

Also in Spain, the Rexal FFF Racing Team demonstrated great harmony, cooperation and hard work, handling difficult moments in the best possible way, supporting all the drivers and celebrating with them the results achieved through incredible teamwork. The next race will be in the week from 31 October to 6 November at Portimao, Portugal, where the Lamborghini Super Trofeo World Final will take place. Stay tuned for a very close championship final!