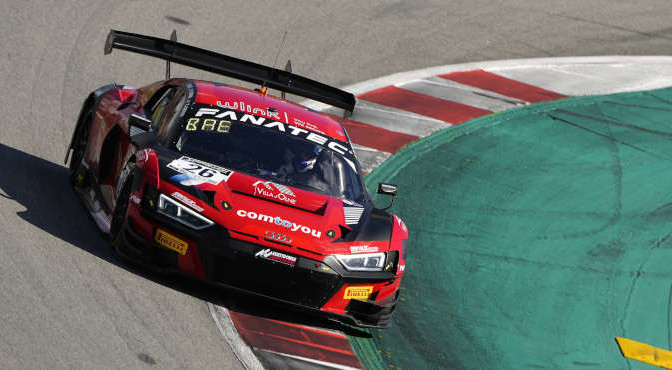 Nicolas Baert finished his season in the Fanatec GT World Challenge Europe this weekend on the Circuit de Barcelona-Catalunya. Together with his team-mates Aurélien Panis and César Gazeau, the young Belgian scored another top 5 in the Silver Cup. The Saintéloc Racing representative also finished 5th in his class in the Endurance Cup of the Fanatec GT World Challenge Europe.

Ten meetings. The 2022 season ended in Spain for Nicolas Baert with a 3-hour Endurance Cup race on the Circuit de Barcelona-Catalunya. “I said at the beginning of the year that I was here to learn,” recalls the driver from Waterloo. “The contract has been fulfilled! The Fanatec GT World Challenge Europe is undoubtedly one of the most competitive championships in the world. The best GT drivers, representing the manufacturers, are there and it is very impressive. But it is when you are with the best that you learn the most.”

Competing in both the Sprint Cup and the Endurance Cup in an Audi R8 LMS GT3, the 21-year-old Belgian finished fifth in the Silver Cup – the young wolves’ category – in both competitions. “Of course, you always think that you can do better,” smiled Nicolas. “The greatest regret will be the early retirement at the Spa 24 Hours… But over the course of a season, it is normal to have ups and downs. Unlike most of the top drivers in the class, I was a real Rookie in GT after two seasons in TCR Europe. In Endurance, my team mate César was also a rookie, but I think we did a good job.”

Nicolas Baert, Aurélien Panis and César Gazeau finished the year with a 5th place in the Silver Cup, out of 18 teams entered for this race in Barcelona. “We were in 3rd place in the Silver Cup on the starting grid,” explains Nicolas. “I drove a good first stint, keeping calm and showing good pace. I was blocked on the straight by a faster BMW which I could not pass, but I did not get upset. César and Aurélien also did their bit, but we lost some time in the pit lane. Anyway, I am happy with my overall performance.”

The book of the 2022 season ends here for Nicolas Baert. “I would like to thank the entire Saintéloc team and my team-mates for this season,” smiles the young Belgian. “I have learned so much! Now I will analyse all this and think about 2023. It is too early to tell you what my future will be like, but I promise you that I will make the most of the experience I have gained this year.