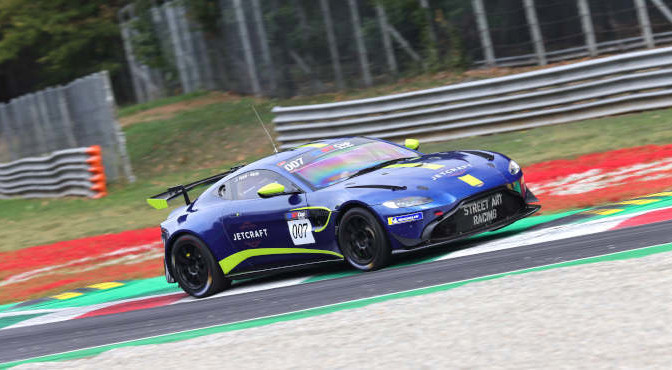 After the Circuit Paul Ricard and the Hungaroring, Street-Art Racing visited a third legendary circuit this year, heading to the Autodromo Nazionale Monza with its Aston Martin Vantage AMR GT3 and GT4. It was a mixed weekend for the Belgian team and its drivers, but there were many positives. Street-Art Racing is experiencing a transitional season in 2022. The team led by Albert Bloem and Damien Hellebuyck is competing a part-programme in the International GT Open and the GT Cup Open Europe, with the aim of gaining experience in preparation for 2023. With a view to the future, the team has also redesigned its website, which you can find at www.streetart-racing.com.
But let us return to the race! On this autumn weekend, the legendary Autodromo Nazionale Monza hosted the International GT Open. After a very encouraging first appearance at Le Castellet and then a weekend marked by… food poisoning in Budapest, Pascal Bachmann was back at the wheel of the superb Aston Martin Vantage AMR GT3 Art Car in the “Temple of Speed”.

“What a pleasure it is to drive this car,” said the Swiss driver. “For my third appearance with the GT3, I had a very good weekend. However, the weather did not help us! While the free practice sessions were held on a dry track, the rain changed everything for the qualifying sessions on Saturday morning. During the 70-minute race there were a lot of incidents, but I avoided any mistakes and my pace was quite good. I finished in 14th place overall, third in the Am Cup. So I was able to get my first podium with the GT3!”

The following day, the former Am Cup champion in the GT4 European Series did even better in qualifying, finishing 12th overall and 2nd in the Am Cup on a very tricky track. “In the race, I was too cautious at the start,” admits Pascal. “I have to say that when the whole field arrives at more than 250 kph at the first chicane in Monza, and then has to brake, it is quite impressive! I lost a few places… which I had hoped to regain. Unfortunately, a technical problem forced me to retire. But that is not the main thing. The most important is the pleasure I had at the wheel and the progress I made. I cannot wait for the next event!”

Street-Art Racing is also competing in the GT Cup Open Europe, the “second division” of the meetings organised by GT Sport, which includes Porsche 911 GT3 Cup and GT4 cars. Jahid Fazal-Karim and his coach Julien Darras had an emotional meeting in an Aston Martin Vantage AMR GT4.

“During the first free practice session Jahid went off the track at the first Lesmo corner,” explains Team Manager Damien Hellebuyck. “The car was badly damaged. We had to take our second Vantage AMR GT4 for the rest of the weekend, but at least Jahid and Julien were able to drive.”

For Jahid Fazal-Karim, who is making his motorsport debut this season, the discovery of Monza was enthralling. “It may sound strange, but accidents are an integral part of the learning process,” says Julien Darras. “I would even say that it is practically an obligatory passage for any driver. It is the reaction afterwards that is the most important and I am very happy with the way Jahid reacted. He got back behind the wheel straight away and his confidence returned little by little. In the race he was very consistent and he is becoming more and more so, and that allows us to work on the points requiring improvement. In this championship, where the Porsche 911 GT3 Cup cars are much more competitive than our GT4, we do not have any real competition against which to measure ourselves, but the progress is clear for all to see.”
After this stage in Italy, the Street-Art Racing trucks have already headed off towards Spain, with the final round of the International GT Open and GT Cup Open Europe scheduled for 14, 15 and 16 October at the Circuit de Barcelona-Catalunya.