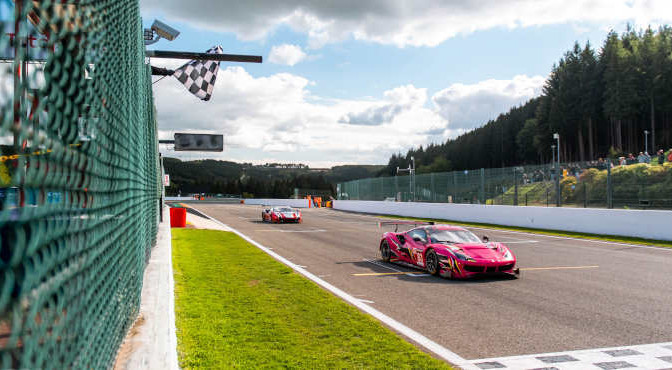 Today, Italian racing team, Iron Lynx and its all-female line up, the Iron Dames celebrated another fantastic podium finish in the penultimate round of the European Le Mans Series (ELMS) at the Circuit de Spa-Francorchamps.
Both cars survived the early chaos of the race, with several cars in the field spinning in the tricky conditions before the safety car was deployed.
Sarah Bovy started the Iron Dames machine in fourth place, making some great moves once the race restarted, clearing the traffic of the LMP3 cars, taking #83 into second place in the LMGTE class. She did well to avoid a spinning LMGTE car at Raidillon, and took the class lead just before the end of the first hour.
Doriane Pin took over the #83 Iron Dames Ferrari 488 GTE Evo and stayed in the lead after a Full-Course Yellow period. The 18-year-old put in a great stint in her first official race laps in ELMS, having helped the Iron Dames to a historic Gold Cup win in the TotalEnergies 24 Hours of Spa in July.
She handed over to Michelle Gatting for the final hour, having built the gap throughout her time in the car.
Michelle brought the #83 car home for another podium finish in Spa, with all three drivers having fought for the victory.
Claudio Schiavoni started the #60 car from P8, and the Iron Lynx car remained in the top ten for the first two hours, before Claudio handed over to Matteo Cressoni around the half-distance mark.
Matteo kept the car out of trouble throughout his stint, and Davide Rigon’s pace helped the team secure a ninth-place finish.
The Iron Dames’ second-place finish moves them up to fourth in the LMGTE championship. The #60 Iron Lynx car stays third after confirming its victory in the previous round at Monza.
In LMP2, the #9 PREMA Team car started eighth and raced through the field to finish third. Louis Deletraz, Ferdinand Habsburg and Juan Manuel Correa continue their push for the LMP2 and overall title into the final round.
Iron Lynx Team Principal, Andrea Piccini said: “This weekend the team did a perfect job. We had fast cars, a good set up and we were very competitive.

“The Iron Dames in car #83 were fighting for the victory the entire race, and they managed to secure another fantastic podium finish, moving up the championship several places into fourth in the LMGTE class. This was Doriane’s first real ELMS race and she performed incredibly, showing good pace, consistency, and good traffic management.

“In the #60 car, Claudio had his best qualifying of the season and despite the difficult starting conditions, the team managed to bring home some valuable points to remain in third place of the championship in class. We will keep on the fight for second position with one race left to go.”