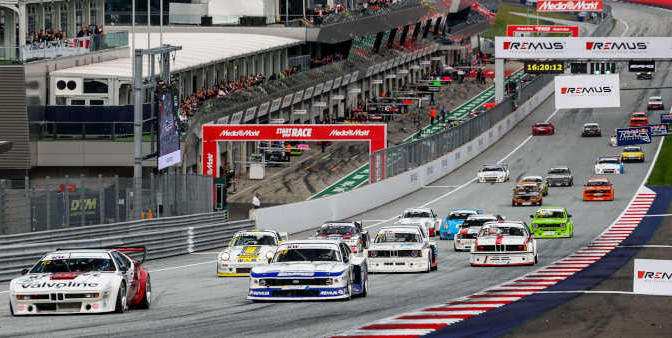 It was a win unlike any other. In practice on Friday, the Ford Zakspeed Capri Turbo caught fire, but after a night shift and an elaborate parts run, Peter Mücke celebrated a commanding victory in the Saturday race of the DTM Classic DRM Cup at Red Bull Ring. But it was not just Peter Mücke who sprayed the usual champagne full of joy as Swiss BMW M1 driver Michael Kammermann and Porsche driver Michael Hess did likewise, rounding out the podium in second and third place respectively. Ford from BMW and Porsche: three brands that made their mark on the Deutsche Rennsport-Meisterschaft in the 1970s, the series that had a remarkable revival in Styria a year ago. At the same venue, the newly-introduced DTM Classic DRM Cup is looking back upon a successful inaugural season.

“This was the most difficult victory to date,” Peter Mücke underlined. His BWT Mücke Classic Team had worked on the Zakspeed Capri until 4am to repair the damage caused by a fire in the engine bay. Peter Mücke himself drove over 500 kilometres on Friday evening to obtain urgently needed spare parts. “Giving up is not an option! It was tough, but it was worth it,” the 75-year-old from Berlin-Altglienicke said. “With just 0.9 bar of turbo boost, I only had little power,” Peter Mücke reported an issue with the turbo boost management that slowed him down both during qualifying and the race. From a rather unusual eleventh place on the grid, he already moved up into second place on the opening lap of the race and with eleven minutes to go, he overtook Michael Kammerman’s BMW M1 Procar that had led the field for a long time. Eventually, he won with a margin of over one minute. With the BMW M1, one of four in the impressive field, the Swiss had posted the fastest lap time in qualifying ahead of Austrian Erich Petrakovits with another Group 5 Capri and the latter’s compatriot Michael Steffny with the Group 5 320 from the days of the BMW Junior Team with Manfred Winkelhock, Marc Surer and Eddie Cheever.

“The race really was fun. That I even made it onto the podium in third, however, surprised me,” a visibly happy Michael Hess said after having decided the duel of the two Porsches 911 RSR against Edgar Salewsky in his favour. Eventually, it was Ronny Scheer who paved the way towards the podium, having had to park his M1 Procar with a fuel pump issue just before the end. Behind Jürgen Adi Schumann with the BMW 635 to the liberal Group 5 regulations in fifth place, Porsche driver Malte Müller-Wrede, BMW driver Steffny and Anton Werner with the Audi quattro staged a lively three-way battle. With the DeTomaso Pantera (Group 4), Franz Staub finished ninth in the race of 25 minutes plus one lap while Wolfgang Kaupp was tenth with his Opel Kadett C. To be continued: the final race of the season starts on Sunday at 4.20pm and will be broadcast live by Servus TV and DTM TV (tv.dtm.com).