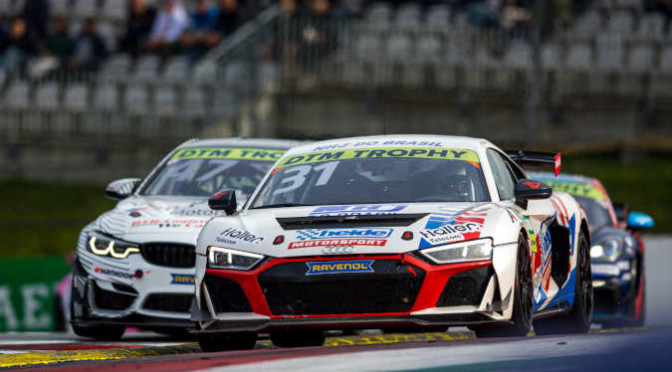 Dutchman Colin Caresani found back to winning ways in DTM Trophy. With his BMW M4 from the Project 1 team, Caresani kept the opposition at bay after 20 action-placed laps in the Saturday race at Red Bull Ring in Austria. Brazilian Thiago Vivacqua came second with the Heide-Motorsport Audi followed by Jacob Riegel (GER) with the Speed Monkeys Aston Martin. The duel for victory between Caresani and Vivacqua largely dominated proceedings in the eleventh race of the season in the talent pool on the high-quality DTM platform. Especially on the first few laps, the BMW driver and the Audi driver staged thrilling wheel-to-wheel battles. Vivacqua had started the race from pole position, but Caresani had the upper hand as the race went on. Only in the closing stages, the Dutchman came under pressure once more. Following a late safety car intervention, he initially lost the lead during the spectacular restart in double-file formation, but was able to claim it back after only a few corners.

After his pair of wins at Imola, Caresani brought back the excitement in the battle for the DTM Trophy title with his third win of the season. He reduced the gap to points’ leader Tim Heinemann (GER) with the Toyota from Toyota Gazoo Racing Germany powered by Ring-Racing to only 32 points with three races still remaining. In the Saturday race at Spielberg, the Toyota driver temporarily ran in fifth place, but eventually dropped back to finish twelfth. As a result, the 2020 DTM Trophy champion remained empty-handed in the Saturday race in Styria.

“That was a great race. These points are exactly what we needed,” Caresani said. “I made a huge mistake at the restart, that was really stupid. After that, I was very lucky to get back in front again. The car was really good. This shows that everything is perfect when we get it right with the tyres. However, I don’t want to think about the championship yet at all. On Sunday, we want to score the maximum of 29 points if possible.”

Behind Caresani and Vivacqua, Riegel made perfect use of the restart and claimed third place from Mercedes-AMG driver Rodrigo Dias Almeida (BWT Mücke Motorsport) from Mozambique. Caresani’s German teammate Louis Henkefend finished fifth. German Daniel Gregor (KÜS Team Bernhard), who temporarily ran in third place with the Porsche, was unlucky. A collision with Almeida’s French teammate Edouard Cauhaupé, who ran into the back of the Porsche and whose Mercedes-AMG got airborne in a spectacular way put an end to both drivers’ hopes of a top result.

The second DTM Trophy race at Spielberg gets underway on Sunday at 3.15pm and will be broadcast live on the streaming platforms ServusTV ON (servustv.com) and DTM TV (tv.dtm.com)