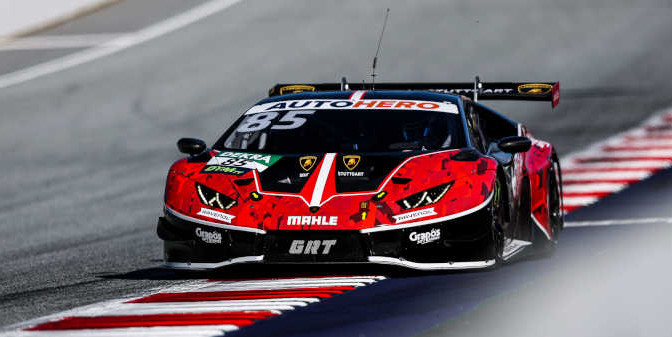 Tyrolean Clemens Schmid with the Grasser Racing Team Lamborghini and South African Sheldon van der Linde with the Schubert Motorsport BMW set the pace in the two free practice sessions on Friday, the opening day of DTM Red Bull Ring powered by REMUS. The lap time of 1m 28.565s set by local hero Schmid in the first session was the fastest time of the day at the 4.318 kilometres long track in Styria. Behind Schmid and DTM points’ leader Sheldon van der Linde (1m 28.574s), another Austrian, Thomas Preining (1m 28.594s) ended up in the top three of the day with the KÜS Team Bernhard Porsche. In bright sunshine, the 27 drivers from DTM participated in the practice day in preparation for the 13th and 14th race of the season. In the process, margins were small: in the morning, the times of the first 21 drivers were within one second, in the afternoon, it was even the first 25.

Clemens Schmid emerged fastest from a session for the first time in his DTM career. “Being on top for the first time is a very special feeling and even more so in front of a home crowd and in beautiful weather,” he said. “We have been fast all year already, but now being in front at this track is still slightly surprising.” In the addition of the day’s sessions, Sheldon van der Linde was the fastest BMW driver in second from the two Porsche drivers Preining and Dennis Olsen (NOR, SSR Performance), the Saturday race winner from Spa. Nico Müller (SUI, Team Rosberg) was the fastest Audi driver, fifth overall. Lucas Auer (AUT, Mercedes-AMG Team WINWARD) also made it into the top ten as the best-placed Mercedes driver. Leon Köhler made his DTM debut, standing in for Esteban Muth in the Walkenhorst BMW with starting number 10. The 23-year-old posted the 18th time in first practice and ended up eighth in the second session. In the addition of the day’s times, he was tenth.

In DTM Trophy, the talent pool on the DTM platform, Daniel Gregor (GER, KÜS Team Bernhard, Porsche) posted the fastest time of the day. With his time of 1m 37.907s in the morning practice session, he was 0.034 seconds faster than Frenchman Edouard Cauhaupé with the BWT Mücke Motorsport Mercedes-AMG who topped the time sheets in the afternoon. While Gregor and Cauhaupé were the only drivers to post a sub-1m 38s lap time. Cauhaupé’s teammate Rodrigo Almeida (MOZ) and Nick Hancke (GER) with the Aston Martin (Team Speed Monkeys) were also separated by only four hundredth of a second. Behind them, Louis Henkefend (GER) made it into fifth place in the addition of the two sessions. As a result, four brands were represented in the first five places.

Packed programme in Styria during the weekend

While numerous visitors already enjoying the action on Friday, racing fans can also look forward to a packed programme on Saturday and Sunday as well. Next to DTM and DTM Trophy, the historic cars from the Deutsche Rennsport-Meisterschaft in the DTM Classic DRM Cup cause fascination as well. Moreover, the BMW M2 Cup one-make series is also part of the event package on the high-quality DTM platform in Styria, with multiple attractions for the spectators in the paddock as well. Tickets are available from tickets.dtm.com, +49 1806 991166 and at the tickets sales booths.