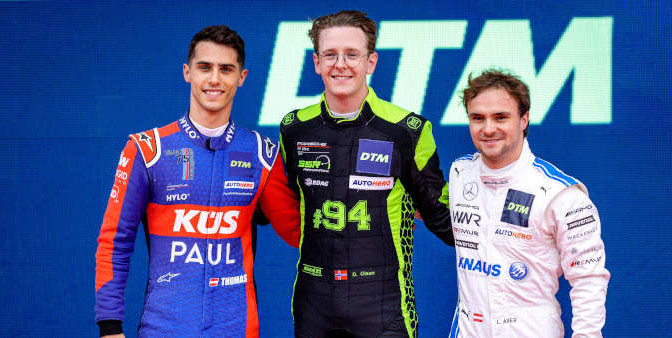 Lucas Auer is the prime candidate for a home win during this weekend’s DTM Red Bull Ring powered by REMUS event (23 till 25 September). Currently second in the drivers’ standings, the Tyrolean with the WINWARD Mercedes-AMG is the best-placed Austrian in DTM. “I would be happy with a podium result, a victory would be cool, of course,” the 29-year-old said during the DTM press conference. Meanwhile, Auer is convinced that the battle for the title will only be decided in the final laps of the Sunday race during the Hockenheimring finale (7 till 9 October). “The field is so strong, everybody is so closely together.” Auer and his compatriots Philipp Eng (Schubert BMW) and Thomas Preining (KÜS Porsche) as well as Mirko Bortolotti (GRT Lamborghini) are fully focused on the two races at Red Bull Ring (Saturday and Sunday, live on ProSieben from 1pm CEST): “I expect two spectacular races,” Philipp Eng from Salzburg says on behalf of them all.

Eng is the teammate of Sheldon van der Linde, who is heading to Styria as the commanding leader of the DTM drivers’ standings. “Sheldon is doing an unbelievable job! He is so fast and very consistent in the process,” Eng is giving the South African a remarkable assessment. And Eng points out to another element: “He is an extraordinary teammate. The cooperation is totally open, we are helping one another.” For his home round, Eng would like to experience some success. “I haven’t seen the podium for quite a while.” Nick Cassidy, on the other hand, seems to have broken his duck with a victory in Belgium most recently. “That was only my fifth DTM weekend this season. We have improved the Ferrari and I have found my rhythm.” The New Zealander, who is racing a Ferrari from the Red Bull AlphaTauri AF Corse team, enjoys DTM. “Yes, for me, DTM is an incredible opportunity and it is great fun.” At Red Bull Ring, he loves the fast corners. “The final corner of this circuit in particular is really special,” Cassidy says.

“It is cool that we as Austrians have such a great event,” Norisring winner Thomas Preining delights. He, too, is dreaming of a home win. The Porsche works driver will be racing with a unique helmet in the design of his former team principal Walter Lechner who passed away at the end of 2020. “For me, it is something special to race with this helmet in honour of Walter Lechner.”

Based in Knittelfeld, Grasser Racing Team has the shortest journey to Red Bull Ring. “It is nice that we can all sleep at home. But we are mostly looking forward the many fans,” GRT team principal Gottfried Grasser says. “We love DTM. Competition is incredibly tough and the performance pit stop makes the difference.” Grasser and GRT driver Mirko Bortolotti (ITA), fourth in the standings, want to achieve the maximum at Spielberg “like in every race”, but team principal Grasser admits: “Winning would be wonderful.” It would be the maiden win for GRT and Lamborghini.