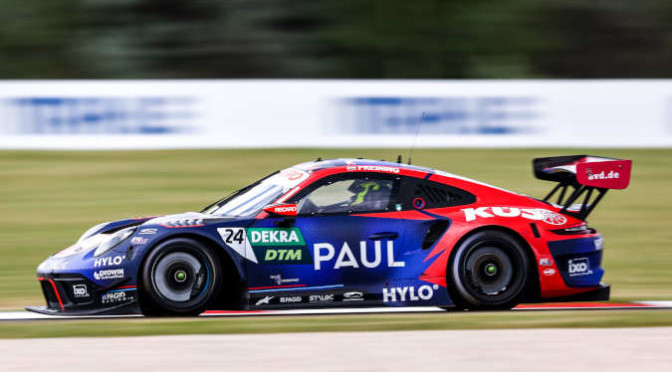 DTM driver Thomas Preining from KÜS Team Bernhard is making his race suit from the 2022 DTM season available for an auction benefitting Wings for Life. Wearing this suit, the 24-year-old Austrian won the Saturday race with his Porsche 911 at Norisring and with this victory, he created a historic moment: for the first time in the series’ history, Porsche won a DTM race. The auction got underway on Monday this week. It is still possible to bid for another fortnight, until 4 October, through “United Charity”, Europe’s largest charity auction portal. Once the auction has ended, the highest bidder will not only receive Preining’s race suit, but also tickets for the DTM finale at Hockenheimring (7 till 9 October) where the race suit at auction will be handed over during the festivities of the prize-giving ceremony.

“I am putting up my race suit for auction for a good cause. I will also sign it during the season finale at Hockenheim. I am happy to be part of this and I am looking forward to an exciting auction with hopefully a high outcome,” says DTM driver Thomas Preining, currently in seventh place of the drivers’ standings at 81 points.

Since the start of the 2022 season, the DTM organisation ITR has been supporting the Wings for Life foundation. The charity partnership between Wings for Life and DTM was announced during the test days at the beginning of the season in Hockenheim. Through the foundation, all the donations go directly and for 100 percent to research projects and clinical studies on spinal cord research. As part of this charity partnership, a DTM driver donated a unique item directly after various race weekends. By auctioning original helmets or race suits, for instance from the 2021 DTM champion Maximilian Götz (Mercedes-AMG Team WINWARD), DTM is contributing to promotion of research related to therapy and cure of paraplegics.
During the previous auction, the helmet of two-time DTM champion.
Marco Wittmann from team Walkenhorst Motorsport was sold. Wittmann’s BMW M anniversary helmet raised the considerable amount of 6,716 Euros and was donated to the highest bidder, a partner of the 32-year-old DTM driver, during the DTM Nürburgring powered by Mercedes-AMG event.

All information and the link to auction can be found at https://dtm.com/de/wingsforlife.