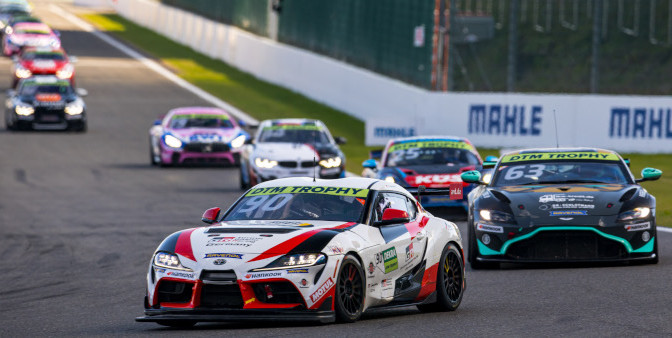 A sextet is battling for the DTM Trophy title. Prior to the eleventh and twelfth race of the season at Austria’s Red Bull Ring (23 till 25 September), six drivers still have theoretical chances of winning the coveted title in the talent pool on the DTM platform. After all, with four races remaining, two in Styria and two at Hockenheim, there are still 116 points remaining, 25 each for a win, three each for a pole position and one for the fastest race lap. With 178 points, Tim Heinemann (GER), driving the Toyota Supra from the Toyota Gazoo Racing Germany powered by Ring-Racing team, is the dominant points’ leader. The 23-year-old is 60 points clear of second-placed Dutchman Colin Caresani (118) with the Project 1 BMW, one more point ahead of 17-year-old Theo Oeverhaus (GER, 117) with the Walkenhorst BMW. The ranks of the title candidates also include Brazilian Thiago Vivacqua (92) with the Heide Audi, Frenchman Edouard Cauhaupé (72) with the BWT Mücke Mercedes-AMG and the only 16 years old Daniel Gregor (GER, 69), who is racing a Porsche from KÜS Team Bernhard, in fourth, fifth and sixth place of the standings respectively. The fact that drivers from four different nations are in the title sextet underlines the internationality of the race series.
Toyota driver Heinemann even has a match point at Red Bull Ring: when he heads back home to Germany with a margin of 58 points or more over his rivals on Sunday, nobody can keep him from his second title win after 2020. However, Uwe Kleen, Toyota Gazoo Racing Germany powered by Ring-Racing team principal, is considering the chances of an early title win as very small, not in the least pointing out to an additional weight of 25 kilograms following the win in the Sunday race at Spa-Francorchamps that will have a particularly negative effect at the fast, 4.318 kilometres long Grand Prix circuit with its long uphill section. Uwe Kleen is full of praise for his driver, meanwhile. “He is listening to the team and is mastering all his tasks well and in a consequent way,” Kleen says. “And he simply knows how to drive fast.”
No driver has scored points in every race, not even Heinemann. Caresani, Oeverhaus and Cauhaupé all had two non-scores, Vivacqua three and Gregor four. The points for qualifying and the fastest race lap are a considerable factor, too. Like this, Heinemann already added 15 extra points to his tally, Gregor eight, Vivacqua and Cauhaupé seven each and Caresani and Oeverhaus four each. Five race wins so far this season underline Heinemann’s impressive performance, the driver having graduated from sim racing to DTM Trophy in 2020. Caresani has scored two wins to date, Oeverhaus, Gregor and Louis Henkefend (GER, Project 1 BMW) one each. Vivacqua, four times on the podium so far, and Cauhaupé, with one podium finish, haven’t yet given up their hopes of scoring their maiden race win either.
The DTM Trophy races get underway at 3.15pm on Saturday and Sunday and are broadcast live on ServusTV (also in Germany) and DTM TV (tv.dtm.com).