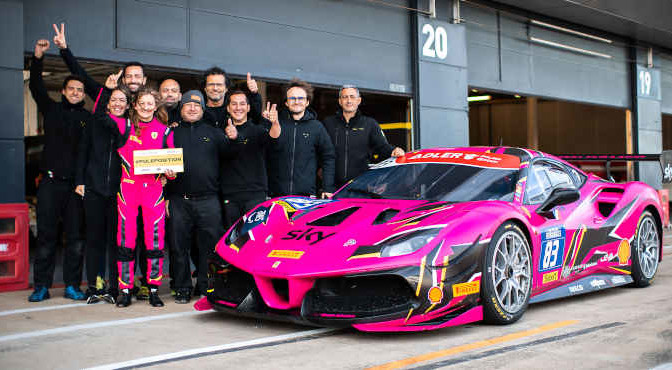 Today, Italian racing team, Iron Lynx and the Iron Dames concluded a successful weekend at Silverstone in the Ferrari Challenge Europe Trofeo Pirelli, as Doriane Pin took two poles and won both races convincingly to extend her championship lead. Doriane started the weekend perfectly in the #83 Iron Dames car, finishing both Free Practice and Qualifying 1 on top. The 18-year-old had a commanding lead in the standings going into Silverstone, and started from pole for Race 1. She made a perfect start and withheld early pressure to build a gap at the front.
After leading the first lap, Doriane pulled away and controlled the race, coming home to take her seventh win of the season for the all-female Iron Dames team by nine seconds. Sunday was equally impressive, as she took pole again for Race 2 before winning again by five seconds. The clean sweep at Silverstone extends Doriane’s championship lead to nearly 40 points, giving her a great chance to secure the title at Mugello in October.
Arno Dahlmeyer started in the top ten for both races, but early contact on Saturday and Sunday limited his progress in the #13 car.
Iron Lynx Team Principal, Andrea Piccini said: “This has been a super weekend from Doriane; she didn’t know the track before coming here and Silverstone is a very challenging circuit.

“She did extremely well in the test and was much faster than all the others.
“Once the weekend started she was quickest in practice, took two pole positions and won both races, controlling the pace well with no mistakes, so I would say the perfect weekend.
“We’ve pulled away to increase the lead in the championship. It’s looking good with only two rounds left with a big lead, now she only has to control things.”
The Ferrari Challenge Europe Trofeo Pirelli continues at Mugello on 7 – 9 October.