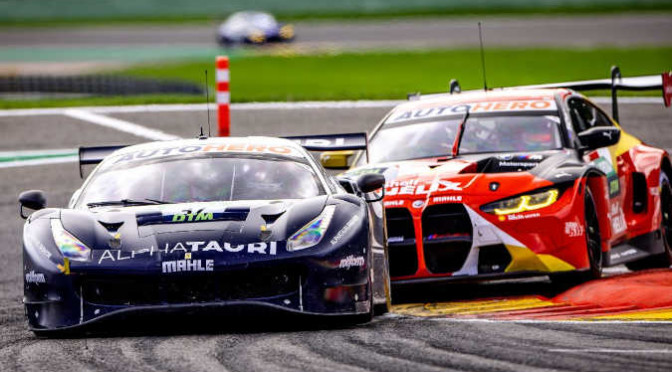 New Zealander Nick Cassidy took his maiden race win in DTM. The 28-year-old Ferrari driver from the Red Bull AlphaTauri AF Corse team always came out on top in the Sunday race at the Spa-Francorchamps Grand Prix circuit in extremely exciting two-way battles at the front of the field. Having started from third place on the grid, Cassidy emerged as the delighted race winner from Sheldon van der Linde with the Schubert BMW and Thomas Preining with the KÜS Team Bernhard Porsche. South African Sheldon van der Linde got his race off to a good start, immediately overtook pole-sitter René Rast (ABT Sportsline Audi) and led the field until he came in for his mandatory pit stop at the end of lap nine. During his stop, there was an issue with the left front wheel, extending it to over eleven seconds and costing him the lead. Subsequently, Nick Cassidy had to work had on several occasions to defend the lead.

Nick Cassidy: “It really is a fantastic feeling and winning in this championship is something that had been on my list for a long time. The battle with René was very, very hard and so was the one with Sheldon on cold tyres. And yes, I went all-in, I had nothing to lose, but I definitely wanted to win and I left nothing untried.”

In qualifying in the morning, pole-sitter Rast had been fastest with a time of 2m 23.424s and secured three championship points. Having been overtaken by Sheldon van der Linde at the start, the 35-year-old tangled with Nick Cassidy in a direct duel. With him, he staged a thrilling duel over several laps. The contact would have resulted into a five-second time penalty, but Rast had to park his car following a puncture in the closing stages, which prompted a full-course yellow. The restart with only one lap remaining spiced up the action once again. During the spectacular formation start, Cassidy had the upper hand over van der Linde. Third on the podium, like on the previous day, was Porsche works driver Thomas Preining (KÜS Team Bernhard).

Swiss Rolf Ineichen posted the fastest race lap time with the GRT Grasser Racing Team Lamborghini in the race on Sunday and earned his first point in the drivers’ standings as a result.

After the eleventh and twelfth race of the season, Sheldon van der Linde remains the leader in the standings at 130 points. Meanwhile, he is 32 points ahead of second-placed Lucas Auer (98 points, Mercedes-AMG Team WINWARD). Next up are René Rast (96) and Italian Mirko Bortolotti (94, GRT Lamborghini) as the nearest rivals. Birthday boy Lucas Auer started from tenth on the grid, worked his way up and temporarily had very good chances of a podium finish, but just missed out and came fourth. The Austrian intends to score further points in his home round at Red Bull Ring in a fortnight (23 till 25 September). At Spielberg, the battle for the 2022 DTM champion’s title goes into the penultimate round. Tickets and further information about the seventh race weekend at www.dtm.com.