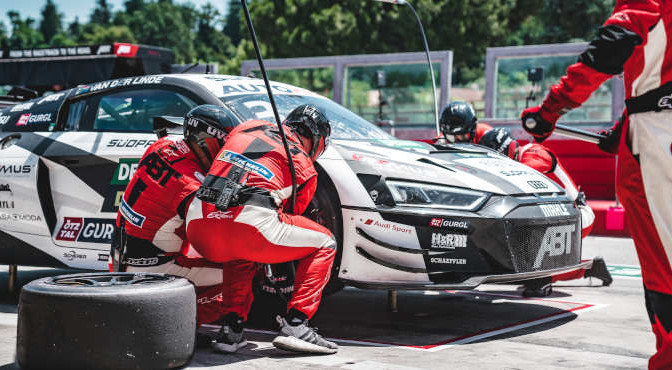 Next weekend, the DTM returns to Spa-Francorchamps in Belgium for the first time since 2020 (both races live on ProSieben and ran.de from 1 PM CEST on Saturday and Sunday). Team ABT Sportsline won both DTM races there in 2020 and tested at Spa during the summer break with René Rast. Kelvin van der Linde and Ricardo Feller have already contested the Spa 24 Hours with the Audi R8 LMS GT3 evo II this year and, just like Rast, are big fans of the demanding racetrack.

All three ABT drivers are in the top ten of the overall drivers’ standings before Spa. In the teams’ standings, Team ABT Sportsline currently holds second place. With two victories, seven podiums and three pole positions, the team’s interim tally after ten of 16 races is positive. And ABT Head of Sports Marketing Harry Unflath is also in high spirits ahead of the last three DTM weekends of the 2022 season.

What’s your verdict after around one and a half years of DTM with GT3 sports cars?
Absolutely good! I think it’s great what Gerhard Berger has done. DTM is a great platform for sponsors, where the focus is once again on motorsport, as it used to be. There were times when the DTM was dominated by huge VIP tents. Personally, I like it better this way. It’s also much easier to get partners excited about the DTM again, because they are now part of the team again and really experience motorsport up close.

ABT Sportsline was an Audi factory team in the DTM from 2004 to 2020. How big was the change to now compete as a private team again?
The biggest difference is that I can now address the partners directly again – much like in the first years of our DTM involvement from 2000 to 2003. In that respect, it was a bit of a new start, but we have already adjusted.

How is the response from the partners?
Very good. We currently have 17 partners and they all want to be involved again next year. I don’t know anyone who says that they don’t like the DTM. We look after our partners very intensively, meeting every two months for workshops – most recently at Fujitsu in Munich, for example, and next week in the Ötztal. The personal and family atmosphere is very important to us. But it’s also important for the partners to get to know each other and generate business among themselves. Sometimes things come up that we didn’t even know about. And that’s a good thing.

It looks like you have more partners than any other DTM team. Does that make you proud?
It’s not my partners, it’s ABT Sportsline’s partners. But of course, it makes one proud when you have put the logos of so many renowned companies on the cars over the years. For me, our partners are living proof of how important it is to talk to people personally and not just send them a video or a presentation. That’s the only way to get people excited.

You also look after the partners very intensively at the races. Is that a key to success?
You have to fill partnerships with life, and that’s what we do – at the racetracks, but also when our partners are with us at the company in Kempten, or when I’m with them. It’s very time-consuming, but it pays off. If you give a lot, you get a lot. I also still have a good connection to former partners. We don’t forget what they once did for us – and vice versa.

Do the partnerships in the DTM also give rise to other business relationships?
There is almost no partner who does not have ABT Sportsline vehicles in their company.

What makes ABT Sportsline so special in your eyes?
The family atmosphere, but also our success. At ABT Sportsline, it’s not the Olympic idea that counts. Wherever we compete in motorsport, we want to win. Everyone in the team has this gene. Everyone fights for success. Our partners also see that.

You’ve seen a lot of drivers in 22 years of DTM. How do you rate René Rast, Ricardo Feller and Kelvin van der Linde?
We’ve had a lot of great drivers in the team, but these three fit together particularly well and are exemplary in this respect. I’m pleased that we have three top drivers who respect each other and work well together for the team.

Ricardo Feller is the newcomer to Team ABT Sportsline. What do you think of him?
I think he’s very nice, I get on well with him and he’s a top driver. He has already won a race and proved what he can do. He’s been up front in the DTM right from the start and knows what he wants. I can only thank Christian Scherer for bringing him into our team. Ricardo is a great fit for us.

The partnership with Christian Scherer goes far beyond motorsport. At the Nürburgring, for example, special models from ABT Sportsline were presented, which are distributed by the Scherer Group.
The partnership with Christian Scherer is a very special one. Everything he does, he does with love and heart and soul – and the family is also part of it for him. He lives his company and also motorsport. Just like us at ABT Sportsline. The Scherer Group has grown tremendously in recent years. There are now over 40 dealerships. The success proves him right.

What would you tell a potential new partner about why he should come to ABT Sportsline in the DTM?
I would tell them that the best thing they could do is to get to know our other partners and ask them what ABT Sportsline is all about. That usually works. People simply have to see for themselves how we work with our partnerships – the best way to do that is at the racetrack or by visiting us in Kempten.

In terms of environmental conservation and sustainability, motorsport is currently somewhat under criticism. How important is the future DTM Electric category?
With Schaeffler, one of our long-standing partners is already working on DTM Electric. Motorsport with electric cars has its justification. After all, we have been competing in Formula E since 2014 and now also in Extreme E. But I also believe that the gasoline and diesel engines are far from dead, but are important for the entire cycle, for example in combination with e-fuels. I don’t think it will work with electricity alone. Electric propulsion will come, but you can’t change the whole world in ten years. It took the car 100 years. We have to get cleaner, but we can’t turn everything upside down overnight.

You mentioned Formula E. After a one-year break, ABT Sportsline is returning to the electric racing series in 2023. How is the search for partners going?
That’s taking up a lot of time right now, of course. Talks are ongoing with potential new partners, but also with partners with whom we have already worked successfully in the past. The response is positive and we still have some time.

What makes Formula E particularly attractive for partners?
It’s the cities, first and foremost. We have already been to 28 major cities around the world with Formula E. The races in the cities are gigantic and it’s great to be able to take a look at a city like Hong Kong in the evening with the guests after a race day. The audience present in the cities is different than at the DTM. And almost everyone who has been to a Formula E race finds it fascinating. Formula E also offers really great motorsport.

ABT Sportsline also competes in electric motorsport in Extreme E with CUPRA. Why is this racing series interesting for partners?
Extreme E also offers great motorsport, but the special aspect here is the venues. The series draws attention to where something is wrong and where something has to happen. When you see the ice melting on the glaciers in Greenland, that’s a powerful message. The series is particularly interesting for companies that care about sustainability. And they are partners of a factory team with a fascinating car, the CUPRA Tavascan – that fits in perfectly with Extreme E. I also get a lot of pleasure from getting partners excited about this topic.

Back to the DTM: René Rast said he’d like to celebrate with the whole team at the Sonnenalp Resort if the DTM title works out …
That made me very happy, because the Sonnenalp is also a long-standing partner of ABT Sportsline. I immediately called Michael Fäßler and spoke to the whole family. They are friends of ABT Sportsline and they are keeping their fingers crossed for us at the DTM races. I am sure that this can be achieved – even easier than with the last title, when we went to Las Vegas with the whole team. But to do that, we first need two top results next weekend at Spa.

Quotes before the DTM races at Spa-Francorchamps

Thomas Biermaier (Team Principal): “We only have good memories of the DTM at Spa. In 2005, we clinched a double podium with Mattias Ekström and Tom Kristensen, and in 2020, we won both races with Nico Müller. Spa is one of the best racetracks in the world and a guarantee for spectacular races. We always enjoy coming to Spa and, of course, hope that the BoP is right and that we’re competitive. The championship is entering its decisive phase. After Spa, the Red Bull Ring is a particularly difficult racetrack for the Audi R8 LMS. That makes it all the more important for us to score as many points as possible at Spa.”

Kelvin van der Linde (ABT Audi R8 LMS GT3 evo II #3): “Next to the Nürburgring-Nordschleife, Spa is one of the best racetracks in the world for me. I know my way around there well and have already clocked up many kilometres with the Audi R8 LMS at Spa this year during the 24-hour race. From that point of view, we’re well prepared. After I managed a great start to the second half of the season at the Nürburgring, it can happily continue like this at Spa.”

Ricardo Feller (ABT Audi R8 LMS GT3 evo II #7): “The anticipation for Spa is huge. It’s definitely my favourite track on this year’s DTM calendar. As far as results are concerned, I don’t have any good memories of Spa for myself yet. Nevertheless, in terms of the track, it’s my favourite and I also think that our car will be very good there, especially in the second sector. I’m definitely really looking forward to it.”

René Rast (ABT Audi R8 LMS GT3 evo II #33): “Spa is one of the traditional circuits on the DTM calendar and certainly one of the most beautiful and fastest racetracks around, with many interesting corners such as the Eau Rouge. I hope that we’ll be competitive at Spa. We tested there during the summer break to gather setup data. Hopefully we found out the right things and drew the right conclusions. The frustration after the Nürburgring was huge. But we’re fully motivated again and heading to Spa full of fresh energy.”

… Ricardo Feller and Kelvin van der Linde invited the entire team to a barbecue in Kempten on the Monday evening before Spa?

… Jean-Marie Pfaff, one of the world’s best football goalkeepers in the 80s (among others at FC Bayern Munich) will be visiting Team ABT Sportsline at Spa?

… the DTM is visiting Spa-Francorchamps for only the third time after 2005 and 2020?

… Team ABT Sportsline has won two of the previous three DTM races at Spa?

… René Rast will be a guest at the DTM pre-event press conference via Zoom on Wednesday (September 7) from 11 AM CEST?