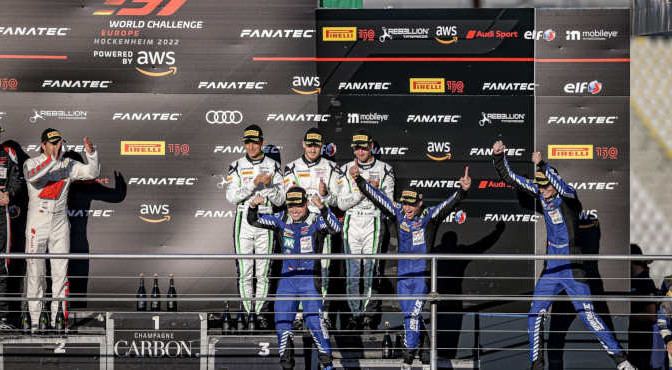 Five weeks after the chequered flag fell on the TotalEnergies 24 Hours of Spa, school was back in session at Hockenheim. Fanatec GT World Challenge Europe Powered by AWS made its very first visit to the German track last weekend, marking the penultimate stop on the 2022 Endurance Cup schedule.
Once the race was underway it soon became clear that an Audi would take the overall win, but with four front-running cars in the mix this was far from predictable. The best of them proved to be Saintéloc Junior Team, which ended a long wait to make a popular return to the top step of the podium.
Hockenheim delivered a fine race, but it also paved the way for a thrilling finale. One class crown was decided in Germany, but the battle for the overall Fanatec Endurance title will go to the wire after both contenders endured disappointment. These are the stories and stats from an action-packed weekend.

* * *
Saintéloc earned its first Fanatec Endurance win since conquering the TotalEnergies 24 Hours of Spa in 2017, a gap of 1,862 days. Indeed, while the French outfit has been a winner in Fanatec Sprint, it had not secured an overall Endurance podium since its landmark triumph in the Ardennes.

* * *
Sunday’s win was the 10th for an Audi and marks only the second time that the Ingolstadt firm has scored two overall Fanatec Endurance victories in the same season. The other occasion was in 2014.

* * *
Chris Mies won for the first time since the opening round of the 2018 season. The German driver now has four Fanatec Endurance victories to his name, all of which have come in Audi machinery. Swiss duo Patric Niederhauser and Lucas Légeret both became first-time winners on Sunday afternoon.

* * *
By triumphing from sixth on the grid, the #25 Audi snapped a run of five successive races won from pole. This was the third instance of a car winning from sixth overall following the inaugural race at Monza in 2011 and at Circuit Paul Ricard in 2015.

* * *
Second-place finisher Attempto Racing earned its first overall podium since the 2020 TotalEnergies 24 Hours of Spa. Its line-up was led by Markus Winkelhock – coincidentally, a member of the Saintéloc crew that won the 24 Hours back in 2017 – and also featured first-time podium finishers Dennis Marschall and Kim-Luis Schramm.

* * *
With just over 10 minutes left on the clock Audi looked set for an unprecedented overall podium sweep, only for the #12 Tresor by Car Collection entry to hit problems. The car took the lead during the first hour with Mattia Drudi at the wheel and only lost out at the final pit stop. A left-rear puncture ultimately ended the team’s day, though a breakthrough result looks closer than ever.

* * *
Instead it was Dinamic Motorsport that completed the podium, earning a best result of the season for Porsche. Regular drivers Klaus Bachler and Matteo Cairoli were joined in the #54 entry by Alessio Picariello, who earned his first overall podium in the series.

* * *
The #2 GetSpeed entry produced a strong race to finish fourth overall. Luca Stolz was especially fast in qualifying and just held off the #46 Team WRT Audi of Nico Müller at the end. Despite this, the GetSpeed crew has fallen out of title contention.

* * *
Indeed, only two crews can still win the overall Fanatec Endurance drivers’ crown – and neither of them saw the chequered flag at Hockenheim. The #71 Iron Lynx Ferrari was the victim of an intra-team collision after 30 minutes, while the #88 Akkodis ASP Mercedes-AMG lacked pace all day and ground to a halt during the closing stages.

* * *
The Akkodis trio of Marciello/Gounon/Juncadella will take an 11-point advantage to Barcelona next month. The teams’ championship is more open, with both WRT and ROWE Racing holding on to an outside chance of snatching the title.

* * *
Team WRT may well have had a strong chance, but its #32 Audi began to encounter problems while leading during the first hour and retired shortly after its pit stop. This is the third successive Fanatec Endurance race that the trio of Vanthoor/Weerts/Van der Linde have failed to finish following their season-opening win at Imola.

* * *
The #63 Emil Frey Racing Lamborghini of Mirko Bortolotti posted the fastest lap of the race – a 1m38.324s – during the final hour. The car had podium potential, running as high as second in the first stint, but was pegged back by small issues. Sixth at the chequered flag still matched its best finish of 2022.

* * *
Emil Frey Racing was celebrating a Silver Cup thanks to its #14 Lamborghini. The young crew of Konsta Lappalainen, Stuart White and Mick Wishofer were impressive from start to finish and ultimately bagged seventh overall. White was notably fast during the middle hour and did brilliantly to catch a vicious slide while going wheel-to-wheel with Winkelhock’s Audi.

* * *
Audi squads Attempto Racing and Team WRT completed the podium, the latter sealing the Silver Cup class Fanatec Endurance title to add to its TotalEnergies 24 Hours of Spa win. The #30 dropped back from pole but climbed the order during the second half of the race before Thomas Neubauer moved the car back into a title-winning position.

* * *
The Gold Cup win changed hands on the final lap of the race when the #911 Herberth Motorsport Porsche suffered a disastrous puncture. It was a cruel ending for German drivers Ralf Bohn, Robert Renauer and Alfred Renauer, who had controlled the class for much of the contest.

* * *
A second win of the season has vaulted Inception Racing into the lead of the championship ahead of next month’s finale. The #7 McLaren trio of Iribe/Millroy/Schandorff hold a nine-point advantage over the Iron Dames squad, the all-female line-up having finished sixth at Hockenheim. Herberth Motorsport also holds a slim chance of snatching the class crown.

* * *
HRT scored its best result of the season by finishing second in the Gold Cup class with the #5 Mercedes-AMG of Scholze/Haupt/Maini. AF Corse completed the podium, giving the #21 Ferrari of Delacour/Sbirrazzuoli/Balzan a first top-three since the opening round of the campaign at Imola.

* * *
AF Corse won the Pro-Am class by just 0.276s over SPS automotive performance. This gave the #52 Ferrari crew of Louis Machiels, Andrea Bertolini and Stefano Costantini a second successive win following their triumph at the TotalEnergies 24 Hours of Spa.

* * *
Garage 59 had looked comfortable in the class lead only to lose significant time to a gear upshift issue on the #188 McLaren. Having qualified 25th overall, the crew of West/Ramos/Chaves secured the best starting spot this season for a Pro-Am car.

* * *
The trio of Machiels/Bertolini/Costantini are now just one point behind Baumann (#20 Mercedes-AMG) ahead of the decider. Garage 59 also has an outside chance, with its #188 crew 19 points off the lead heading to Barcelona.

* * *
Qualifying at Hockenheim was busier than what we saw at the TotalEnergies 24 Hours of Spa. At 4.6 kilometres it is the shortest layout on this year’s Fanatec Endurance calendar, with roughly 94 metres per car. Spa-Francorchamps is the longest at 7 km, which for the 65-strong entry at this year’s race provided approximately 108 metres per car.

* * *
With this being the series’ first visit to Hockenheim, there was uncertainty as to how the race would unfold. Any worries were quickly dispelled as the track produced an action-packed contest. The turn 6 hairpin and the entry to the stadium section were especially good viewing points during the race.

* * *
Hockenheim was soaked by heavy rain on Saturday morning, which ensured that free practice was something of a washout. It proved to be an anomaly, however, with all other sessions staged in dry conditions.

* * *
On an otherwise disappointing weekend, Akkodis ASP could at least celebrate a double win in Saturday’s Fanatec Esports Pro Series race thanks to dominant performances from Dani Juncadella (Pro) and Tommaso Mosca (Silver). With Hockenheim not currently available on Assetto Corsa Competizione, the race was run at Suzuka following a fan vote.

* * *
The final round of the Fanatec Endurance season will take place at Circuit de Barcelona-Catalunya on 30 Spetember-2 October. In the battle for the premier class title, history favours Akkodis ASP: the French team won the event in 2017 and 2020, while the track is known to suit its AMG GT3.

* * *
Before that, the Fanatec Sprint season will conclude at Circuit Ricardo Tormo Valencia on 16-18 September. With an advantage of more than 40 points, Akkodis ASP man Raffaele Marciello is in a strong position to clinch the overall drivers title with an event to spare. He faces a tougher task in the Sprint championship, however, as he and Timur Boguslavskiy trail the #32 Team WRT Audi duo of Dries Vanthoor and Charles Weerts by 11.5 points.