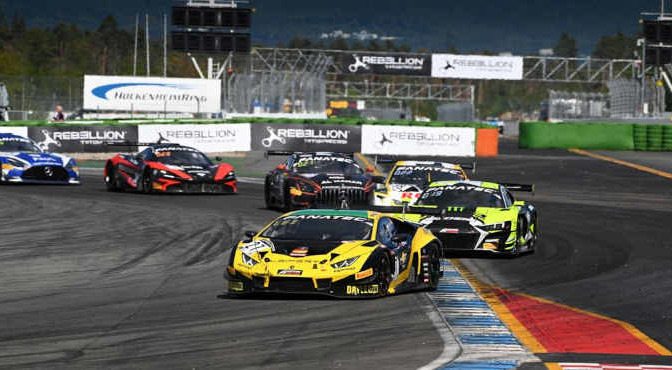 The Spaniard of Kurdish heritage was forced to retire by the halfway point of the 3-hour race at Hockenheim. His teammate Brendon Leitch was hit by Valentino Rossi damaging the oil cooler on the very first lap of the race and it caused several problems forcing to retire later the Leipert Motorsport-run Lamborghini Huracan GT3 Evo in Kurdistan Racing Team by Tigris colors.

Isaac Tutumlu didn’t have Lady Luck on his side during the penultimate round of the 2022 GT World Challenge Endurance Cup at Hockenheim. Tutumlu, who was joined by Brendon Leitch and Jusuf Owega – the latter replacing American Tyler Cooke for this round–, arrived in Germany in high spirits at the wheel of the Lamborghini Huracan GT3 Evo of Leipert Motorsport.

The trio defending the colors of Kurdistan Racing Team by Tigris immediately proved excellent pace in the Silver Cup class. After Saturday’s free practice session, Tutumlu and his teammates headed into pre-qualifying session and clocked a lap time of 1m38.781s showing good pace in long stints and qualifying simulations. Sunday kicked off with qualifying session and Leitch clocked a lap of 1m38.864s in Q1. Tutumlu took part in Q2 and set a lap of 1m38.895s and finally Owega put a lap together of 1m37.938s when the track conditions slightly improved. The average lap of 1m38.565s left them tenth in class of the 50-car grid. The 3-hour race got underway at 15.00 but the safety car was deployed due to a heavy crash when Rob Bell’s McLaren 720S GT3 hit the wall. Leitch, making the opening stint, was hit by Valentino Rossi’s Audi R8 LMS evo II GT3 and the Lamborghini sustained oil cooler damage. As the safety car was out for more than 30 minutes, Leitch didn’t experience any problems at the beginning but things got worse lap by lap. Leitch handed over to Tutumlu after 31 laps and, despite the drivers of Leipert Motorsport ran in the top-the of their class, finally Tutumlu was forced to make an early pit stop on lap 66 and retired soon after.

“It was a crazy start. We are particularly upset with penalty management because Rossi ruined our race and he just handed a 5-second penalty. During the first six or seven laps I was pretty fast, in fact, I was running ahead of a factory-backed Ferrari. Just after, the car was almost impossible to handle. I asked my engineer to make my pit stop twenty minutes earlier because I was losing a lot of time”, explained Tutumlu. He underlined that “during the pit stop, the mechanics found the oil cooler damage. The oil leakage was everywhere, including left rear tire and it was the reason because the Lamborghini was undriveable at right-hander corners. Jusuf made a lap and felt exactly the same. A shame because we had the pace for a good result overall. Let’s see how it goes at my home round in Barcelona on 2 October and if Lady Luck is our side once.”