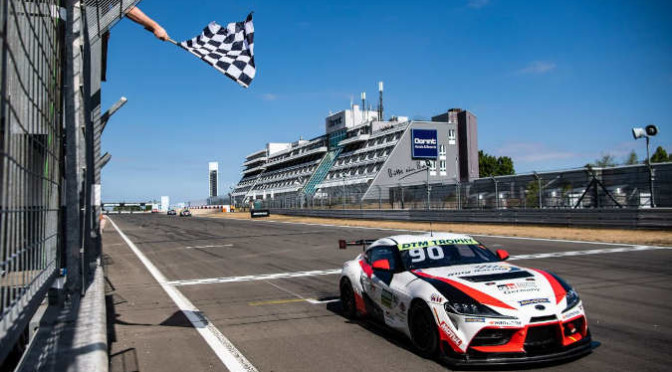 Tim Heinemann crowned a great weekend in DTM Trophy with his second pair of wins of the season. After 20 laps in the Toyota Supra run by Toyota Gazoo Racing Germany powered by Ring-Racing, Heinemann also won the second race in the Eifel, having already stood on the top step of the podium the previous day. During the season opener at Lausitzring, the 2020 DTM Trophy champion already had won both races.

The battle for second place, staged by KÜS Team Bernhard Porsche teammates Daniel Gregor (GER) and Ricky Capo (AUS) between them, was a thrilling affair. Gregor was second right after the start, but following a troublesome start of the race, Capo put in an impressive recovery drive. Initially, Capo dropped back from second on the grid to fifth but overtook Mercedes-AMG driver Edouard Cauhaupé (BWT Mücke Motorsport) from France and Brazilian Audi driver Thiago Vivacqua (Heide-Motorsport) still in the opening stages. Subsequently, Capo started to hunt down Gregor and got his teammate involved in exciting duels. With a few laps remaining, the Australian eventually got past and went on to drive second place home with Gregor in third.

Heinemann had started the eighth race of the season in the talent pool on the DTM platform from pole position and controlled the field at the front in a commanding way. At the finish, the Toyota driver was 2.209 seconds clear of his nearest rival. In the overall standings, Heinemann considerably extended his lead: between him and BMW driver Colin Caresani (Project 1) from The Netherlands, it is now 151 vs 112 points.

Behind the three best-placed drivers, German BMW driver Moritz Löhner (FK Performance Motorsport) fought his way up to fourth ahead of Vivacqua, Cauhaupé and Aston Martin driver Jacob Riegel (GER, Speed Monkeys). Caresani was eighth on the road but dropped back to tenth following a time penalty for causing an accident with Riegel’s teammate Nick Hancke.

The 2022 season in the DTM Trophy run with production-based GT sports cars already continues in a fortnight. At the legendary Spa-Francorchamps circuit in Belgium, the ninth and tenth race of the season will be held.