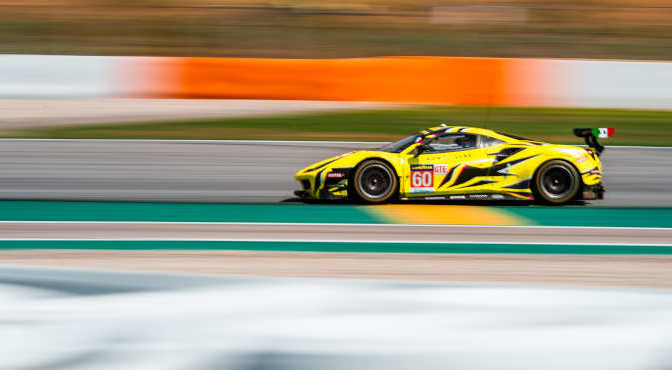 Today, Italian racing team, Iron Lynx made up multiple places to end the weekend with a sixth-place finish in the LMGTE class, as the fourth round of ELMS visited the Circuit de Barcelona-Catalunya.

The #60 Iron Lynx Ferrari 488 GTE Evo of Claudio Schiavoni, Matteo Cressoni and Davide Rigon had very good pace throughout the race, moving up from tenth on the LMGTE grid with a strong strategy helping them up the order.

Claudio Schiavoni started the #60 car, staying out of trouble and settling into ninth place in class before handing over to Matteo Cressoni, who further brought the car up through the field building on Claudio’s good first stint. Davide Rigon took the reins for the final stint, executing a great overtake to bring the car home in sixth place, testament to the team’s solid strategy.

The #83 Iron Dames car started second in the LMGTE class after a brilliant lap from Sarah Bovy in qualifying. The Dames were looking forward to a promising race with Doriane Pin adapting well to the car with quick performances on Saturday and Sarah getting the race off to a good start. However, their race ended early after an LMP3 car didn’t see Sarah and made contact on the first lap.

Iron Lynx Team Principal, Andrea Piccini said: “It was a mixed weekend for us. It is sad the Iron Dames in the #83 car were out of the race so early as Sarah had a nice start. I know they would have been very competitive in the race, most likely fighting for the victory.

“Doriane adapted well this weekend, quickly taking to the car and tyres of the ELMS environment. It is a pity she didn’t get to race.

“We had a very good strategy for the #60 car today and that helped us, especially as the car had 30kg of weight as a result of the appeal in Monza, this was quite a handicap. All drivers performed fast stints and we made the best of the Full-Course Yellow, however the Porsches were fast as usual.

“I wanted to pass on my congratulations to the PREMA Team in LMP2, who came home with yet another victory. The #9 car of Ferdinand Habsburg, Lorenzo Colombo, and Louis Deletraz dominated the race after starting in the middle of the LMP2 pack.

“Now, we are already looking forward to Hockenheim next weekend in GT World Challenge Europe.”

The European Le Mans Series returns for its penultimate round at the Circuit de Spa-Francorchamps on Friday 23 September 2022.