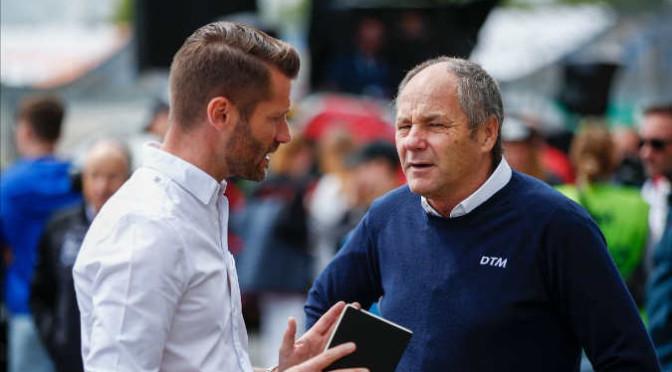 As far as Martin Tomczyk, who has held the position of DTM Representative Brand & Sports and has also been responsible for the series’ management of the DTM Trophy talent pool since this year, the first participation by a DTM Trophy driver in DTM is only a matter of time. “I am confident that we will soon get to see a DTM Trophy driver in DTM.” That ServusTV will be showing all the remaining DTM Trophy races live on television is one of the important course-setting elements for the future, according to Tomczyk. Being responsible for the series’ management of the talent pool, run with production-based GT sports cars, the 40-year-old is committed to prepare the drivers for top-level GT racing in the best possible way. After all, DTM Trophy has the same DNA as DTM, the “one car, one driver principle”, a characteristic feature that is absolutely unique for the DTM platform. DTM Trophy benefits from the exposure of DTM, also for instance in terms of internationality. Moreover, Martin Tomczyk particularly points out the numerous opportunities for young drivers to advance within the DTM platform. As an example, there are already successful drivers in DTM Trophy who have come up both from DTM Esports and from the BMW M2 Cup, the entry-level one-make series that is also regularly run as a part of the DTM support package.

Since the beginning of this year, you have also been responsible for the DTM Trophy series’ management as the Representative Brand & Sports of the DTM organisation ITR. How happy are you with the season so far and which elements are at the top of your agenda to further improve DTM Trophy?

Martin Tomczyk: “Basically, I really enjoy working together with the teams, the manufacturers and the drivers in DTM Trophy. As to the season so far, my view is a bit two-minded. On one hand, it is nice to see that so many drivers from so many countries are participating. I see progress on the media side, too. ServusTV will be broadcasting all the remaining races live, which underlines the interest from our television partner and the value of the series once more. On the other hand, when I look at the way of driving on track and the way infringements are being dealt with, I see room for improvement. There, we have to find a line together that perhaps is a bit more rigid than in DTM in order to take the young driver by the hand, to show them the professional way into professional competition and to support them in the process. That is definitely one of the issues for the summer break, one that we should implement directly as well. To me, the races are absolutely great, the variety of brands, the drivers and also the commitment and the ambition among the teams. Of course, I wish for many cars on the grid, similar to DTM, but there, I am looking positively into the future at the moment as well.”

DTM Trophy is the talent pool on the DTM platform. Especially this season, there are some young talents on the grid coming from the BMW M2 Cup that is also regularly held on the DTM platform. Colin Caresani, the current leader in the drivers’ standings, is one of these successful rookies. M2 Cup champion Louis Henkefend has won a race already as well. How do you rate this development? And when will the first driver from DTM Trophy make it into DTM?

“Being able to follow the development and the progress on the platform like this at present is super. Louis Henkefend and Colin Caresani are coming from the BMW M2 Cup and are doing a super job, racing all the way at the front. This shows that rookies who have come up through the ranks of the M2 Cup as an academy are well prepared for DTM Trophy. Exactly that is what we wanted to achieve across the series. We are proud of having the BMW M2 Cup on our platform. From our DTM Esports support programme, we will see the champion Kevin Siggy in DTM Trophy in 2023. We definitely care about the young drivers and we really like to see talents coming up through various pillars on our platform and eventually make the way through DTM Trophy into DTM. This requires a massive effort, but I am quite optimistic that we will see a DTM Trophy driver in DTM soon. That is our goal and we really are working hard on it.”

The DNA of DTM is also valid in DTM Trophy: one driver, one car, one champion. Which are the advantages of this platform principle?

“The principle – one car for one driver and as a result also just one champion who is crowned in the end – is the right approach for a driver to learn a lot and to do so quickly. For this, we are also getting very good feedback from the teams. For us, this is the route we follow to prepare drivers for top-level GT racing in the best possible way. We want to stand out from comparable series, that is our unique characteristic feature and we want to continue in this way in the future.”

With drivers from eleven nations, DTM Trophy is more international than ever. What, according to you, is the reason for this considerable internationality? Is DTM Trophy particularly benefitting from the huge exposure of DTM in this respect?

“At the start of the season, we were really delighted to have eleven nations represented among 20 cars. That is absolutely great and shows the immense exposure of DTM from which DTM Trophy benefits. For the teams in DTM Trophy, it is also the right way and the right platform to attract the attention. This also confirms that many DTM teams are already using the synergies as they are competing both in DTM and DTM Trophy. For 2023, further DTM teams have already expressed their interest in using these synergies as well.”

DTM Trophy can be watched worldwide on the DTM Grid streaming platform. In Germany and Austria, ServusTV is broadcasting all the remaining races on television in full. Are you happy with the media output?

We are really happy that at Norisring already, and also all the remaining races are broadcast on ServusTV in Germany and Austria, even with presentation live from the grid. Moreover, the races will continue to be streamed at ServusTV On and, of course, DTM Grid in view of a strong international presence as well. Next to ProSieben, retaining the exclusive DTM rights, we have a very strong partner in ServusTV. Looking at the development in DTM, DTM Trophy and DTM Classic, we are in a very good position for the future in terms of TV.”