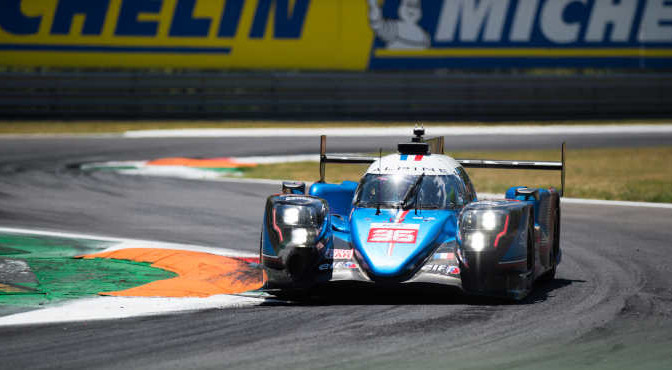 Alpine Team ELF took a memorable victory at the 6 Hours of Monza today to seal its second victory of the 2022 FIA World Endurance Championship season.

In challenging hot and sunny conditions Andre Negrao, Matthieu Vaxiviere and Nicolas Lapierre duelled with the pair of Toyota Gazoo Racing Hypercars in the second phase of the race to emerge victorious.

The hard-earned victory, which was clinched by just 2.782s over the No.8 Toyota GR010 Hybrid Hypercar, included some thrilling wheel-to-wheel battles that had the large crowd on its feet.

One of the crucial moments of the race came in the fifth hour when Matthieu Vaxiviere and Kamui Kobayashi were duelling for the lead on the main straight at 300 kph. A touch between the two saw the Toyota suffer a puncture and damaged bodywork a limp back to the pits. That disappointment was compounded by a 90-second stop/go penalty for the incident, which ensured it slipped back to a third placed finish.

It gave the Alpine a relatively clear run to the chequered flag although Vaxiviere had to watch his mirrors carefully as Ryo Hirakawa mounted a late charge for the lead.

But the Japanese racer was unable to launch a full challenge and the Alpine trio were able to stretch their championship points lead to 10-points.

The Glickenhaus Racing squad took a famous pole position ahead of the race and looked to have put themselves in with a strong chance of a victory charge when the 007LMH Hypercar lead for the first half of the race.

Their chances though ended in the fourth hour when after serving a penalty for a full course yellow violation, Olivier Pla suffered a rare turbo problem and was forced to park the distinctive Hypercar.

The sister No.93 9X8 driven by Jean-Eric Vergne, Mikkel Jensen and Paul di Resta stopped in the first hour but after being worked on returned to action but was eventually retired.

There was drama throughout the categories with Corvette Racing pulling off a superb fuel saving strategy to beat Ferrari on their home soil.

Nick Tandy and Tommy Milner drove faultless races in the Chevrolet Corvette C8.R but appeared to be heading for a close second place after the AF Corse entered Ferrari 488 GTE Evos controlled the LMGTE Pro class for all bar the final few laps.

The No.52 Miguel Molina and Antonio Fuoco crewed entry led until the penultimate lap before it has to make a splash and dash fuel stop.

Corvette though had played a strategic masterstroke as Tandy completed a fuel saving masterclass to manage his pace and surprise everyone with a finely judged last stint economy run. It ensured that Corvette took its first non-Le Mans WEC and the first for the C8.R outside of the US.

AF Corse Ferrari completed the podium with the No.52 car heading home the No.51 James Calado and Alessandro Pier Guidi entry, which was involved in a spectacular battle with the No.92 Porsche GT Team 911 RSR-19 driven by Kevin Estre in the closing stages.

The multiple contacts between the two resulted in Estre receiving a drive-through penalty for several incidents, including one with the No.28 JOTA LMP2 entry.

Realteam by WRT celebrated its first ever LMP2 victory as Ferdinand Habsburg, Rui Andrade and Norman Nato jumped the No.38 JOTA car of Will Stevens, Antonio Felix da Costa and Roberto Gonzalez at the final scheduled stop.

With fresher tyres Habsburg was able to open up a decisive gap to ensure a popular victory for the Swiss entered squad.

The Vector Sport team clinched the final step of the podium as the 2022 WEC rookie entry had its most competitive showing so far. Nico Mueller brought the car home after prior strong stints at the wheel from Ryan Cullen and Sebastien Bourdais.

The Iron Dames were among the stars of Monza as they lead the LMGTE Am category for a large chunk of the race but ultimately had to settle for second. It was though their best ever WEC finish and the first time ever that an all-female crewed entry stood on a WEC podium.

Henrique Chaves emerged unhurt from a spectacular accident halfway through the race when his LMGTE Am TF Sport Aston Martin rolled after hitting a kerb at the Variante Roggia chicane.

The fifth round of the 2022 FIA World Endurance Championship will take place at Fuji Speedway on Sunday September 11.

Hypercar – Won by No.36 Alpine

Alpine Team ELF take second 2022 FIA WEC victory as Nicolas Lapierre, Matthieu Vaxiviere and Andre Negrao seal a famous victory at Monza
Race turns on its head in fifth hour when battle for the lead between Kamui Kobayashi driven No.7 Toyota GR010 Hybrid Hypercar and Matthieu Vaxiviere’s Alpine ends in contact on main straight
Kobayashi suffers puncture and drops back to third place. He then loses further time with a 90-second stop/go penalty after being adjudged to have been at fault for the incident
That leaves a straight battle to the chequered flag between Vaxiviere and the Ryo Hirakawa driven No.8 Toyota GR010 Hybrid
Vaxiviere wins race by a mere 2.782s in thrilling finale to extend championship points lead
Peugeot TotalEnergies squad have troubled debut with a retirement for the No.93 Peugeot 9X8 and a delayed fourth placed Hypercar classification for the No.94 car
Glickenhaus star in first half of race and appeared to have the race under control but were forced to retire with a turbo failure

Ferrari looked as if they would take a brilliant home victory as No.52 AF Corse Ferrari 488 GTE Evo of Miguel Molina and Antonio Fuoco were set to claim their first win of the season
But Corvette Racing pulled off a clever fuel strategy to save enough not to need to splash and dash at the end of the race and Nick Tandy and Tommy Milner execute memorable victory
Molina and Fuoco capitalised on a penalty for a technical infringement for the sister No.51 AF Corse Ferrari driven by James Calado and Alessandro Pier Guidi but had to settle for second when Fuoco had to make penultimate lap pitstop
No.51 AF Corse recovered to take third position after a fraught battle with the No.92 Porsche driven by Kevin Estre
The pair engage in several contacts during the fight which eventually resolves itself at the Variante Roggia when Pier Guidi emerges in front
Estre is handed a drive-through penalty for multiple contacts with Pier Guidi and also No.28 JOTA and finishes fourth in class
No.91 Porsche GT Team duo of Gimmi Bruni and Frederic Makowiecki finish in fifth position after uneventful race
LMP2 – Won by No.41 Realteam by WRT Oreca-Gibson

Realteam by WRT celebrate first ever LMP2 victory as Ferdinand Habsburg, Rui Andrade and Norman Nato race to the win
Habsburg gets the jump on No.38 JOTA driven by Will Stevens at final pit stop and pulls out race winning gap on fresher Goodyear tyres for popular win
Battle for second place plays out in final 30-minutes between Stevens and a charging Nico Mueller in the Vector Sport entry
The battle sees the pair nose-to-tail for the last few laps with Stevens attempting to successfully triple stint his tyres. He completes the mission by just 0.3s to take runners-up position after starting race from last position on grid
No.28 JOTA looked set to battle for victory but an incident with the No.92 Porsche driven by Kevin Estre sees Jonathan Aberdein pitched in to the Lesmo gravel trap and dropped down to 10th position in LMP2
Inter Europol Competition place fourth after most competitive showing of 2022 so far with Alex Brundle, Esteban Gutierrez and Jakub Smiechowski just a few seconds shy of the podium places

LMGTE Am – Won by No.77 Dempsey Proton Porsche

Harry Tincknell, Christian Reid and Sebastien Priaulx take No.77 Dempsey Proton Porsche to its second win of the season after a faultless display
Tincknell overtakes the pole sitting and class leading Iron Dames Ferrari and is able to open decisive gap to take the maximum points but had to complete a splash and dash fuel stop in final six minutes of race
Sarah Bovy, Michelle Gatting and Rahel Frey drive excellent race to claim second place and best ever WEC finish
No.46 Team Project 1 Porsche of Matteo Cairoli, Mikkel Pedersen and Nicolas Leutwiller takes final rung of the podium