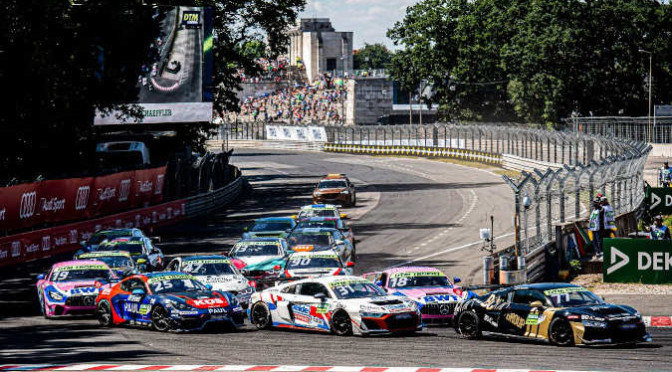 BMW driver Louis Henkefend has won the DTM Trophy race at Norisring on Sunday. After 29 laps, the German was classified as the winner of the sixth race of the season in the talent pool on the DTM platform. His Dutch teammate Colin Caresani rounded out the double success for the Project 1 team by finishing second. Third place went to Mercedes-AMG driver Rodrigo Dias Almeida (BWT Mücke Motorsport) from Mozambique.

Toyota driver Tim Heinemann (Toyota Gazoo Racing Germany powered by Ring-Racing), points’ leader prior to the race, was first across the finish line. Due to a five-second time penalty because of a collision he dropped back to fifth. His German compatriot Theo Oeverhaus (BMW, Walkenhorst Motorsport) suffered from the same fate. He crossed the finish line right behind Heinemann, but was classified sixth. As a result, American JP Southern was promoted to fourth with the EastSide Motorsport Audi, having started from pole position.

Heinemann was in control at the start, leading the field from Henkefend, Southern, Caresani and Oeverhaus. Behind the Toyota drivers, three drivers collided in the first corner which led to a safety car intervention and an extended neutralisation. Shortly after racing had resumed, another accident occurred and the safety car was deployed once more.

In the closing stages, the quintet in front of Heinemann, Henkefend, Oeverhaus, Caresani and Almeida, made up for the extended yellow phases by providing the spectators with entertaining position fights. Temporarily, Heinemann, Henkefend and Oeverhaus pulled clear from their two rivals, but the intense battles of the top trio enabled Caresani and Almeida to close up to the frontrunners again.

Henkefend kept the pressure on Heinemann and put his BMW alongside Heinemann’s Toyota in the braking zones of the demanding Norisring. The 2020 DTM Trophy champion however withstood the massive pressure of his opponents. Heinemann held on to the top position from Oeverhaus and Heinemann, at least on the road, until the chequered flag was out. German Sophie Hofmann also scored point in the second race. With the Heide-Motorsport Audi, she was classified tenth and now has five points to her tally.

The battle between Caresani and Heinemann at the top of the standings continues. After six of the season’s 14 races, the Dutchman is on top with 99 points while Heinemann is only one point down. The next DTM Trophy round will be held at Nürburgring at the last weekend of August.