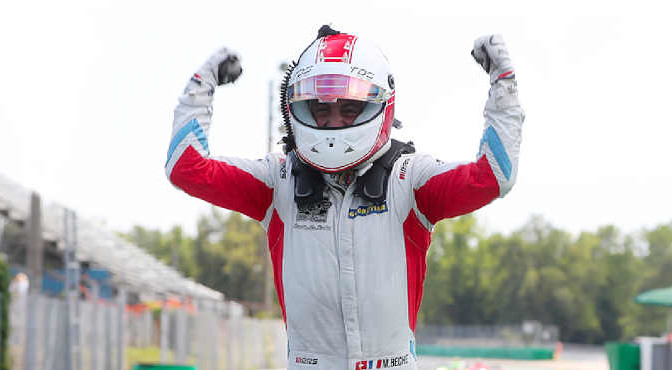 Mathias Beche took his and TDS Racing x Vaillante’s second pole of the 2022 European Le Mans Series with a dominant performance in qualifying ahead of tomorrow’s 4 Hours of Monza.

The early pace in the 10-minute session was made by the no47 Algarve Pro Racing Oreca of James Allen, with the no37 Cool Racing Oreca of Yifei Ye also making a bid for the top spot but missing out by one hundredth of a second.

Beche will joined on the front row of the grid by the no65 Panis Racing Oreca after Job Van Uitert set a 1m38.313 on his last flying lap, 0.281s behind the lead car. Pietro Fittipaldi also set his best time on the final lap to claim P3 on the grid for the 4 Hours of Monza in the no43 Inter Europol Competition Oreca, pushing James Allen down to 4th by just 0.057s.

LMP3: Jakobsen Scores Three from Three in Monza
Malthe Jakobsen took his third pole of the 2022 season for Cool Racing, putting the no17 Ligier-Nissan at the head of the LMP3 grid by nearly eight tenths.

Kay Van Berlo had made an early bid for pole, setting a 1m44.422 in the no3 United Autosports Ligier but was pushed down to second place by the no13 Inter Europol Competition Ligier of Nicolas Pino, the British driver going ahead of the Dutchman by just 0.001s.

After waiting in the pitlane for a suitable gap in the traffic, Malthe Jakobsen brought the Cool Racing Ligier out to play and put in a time of 1m43.627, 0.794s ahead of Pino.

Just as the front runners looked to be ready to go faster the no27 Cool Racing Ligier of Antoine Doquin went off the track into the gravel at Parabolica, bringing out the Red Flag to halt the session with just over two minutes remaining.

When the car had been moved to safety the session resumed, with the remaining LMP3 cars able to put in one more fast lap, but there were no changes in the order as the chequered flag was shown with Jakobsen and Pino on the front row of the LMP3 grid, with row two featuring an all United Autosports line up with Van Berlo’s no3 Ligier JS P320 being joined by Finn Gehrsitz in the no2 Ligier-Nissan.

LMGTE: Ried Takes Pole at Monza for Proton Competition
The pole position in the LMGTE class at Monza was claimed by the no77 Proton Competition Porsche 911 RSR-19, with Christian Ried claiming the cars first pole since Barcelona last season.

Sarah Bovy in the no83 Iron Lynx Ferrari was the early pace setter, the Belgian driver posting a 1m49.302 lap which was nearly a second ahead of the no66 JMW Motorsport Ferrari of Giacomo Petrobelli and the no93 Proton Competition Porsche of Michael Fassbender.

Christian Ried then went into Provisional Pole Position with a 1m49.051 lap, just 0.071s ahead of Bovy, with Ahmad Al Harthy in third in the no69 Oman Racing with TF Sport Aston Martin Vantage.

Sarah Bovy then improved her time to 1m49.105, closing the gap to 0.054s before Christian Ried went quicker on his last lap to claim the pole position with a 1m48.859, with the no83 Iron Lynx Ferrari in second spot.Andrew Haryanto also improved on the final lap to move into third spot on the grid in the no18 Absolute Racing Porsche, pushing the no66 JMW Motorsport Ferrari down to fourth.

The pole for Porsche means the three manufacturers have each taken the top spot in qualifying once this season, with Ferrari claiming pole in Le Castellet and Aston Martin in Imola.

Mathias Beche – no31 TDS Racing x Vaillante Oreca 07-Gibson: “It was fantastic and all the credit goes to the team because, to be honest, we struggled a bit at the beginning of the weekend. We really didn’t have the pace and we were a bit far off. This morning, we put the car back where it was for qualifying, which was a bit of a risky strategy I would say. It was kind of a risk because we never tried the car in a qualifying, but, obviously, it went well. So, they did a great job.

“On my side, we come out with two qualifying and two front row, one pole. This is another pole, so two out of three. We want obviously to keep going, but, for us, and for me personally, I think we were even we finish fourth in Le Mans and we came back from a long way. We were all kind of a bit disappointed about the final result. So it’s a good way to bounce back and show we are here and we’re strong contenders.”

Malthe Jabobsen – no17 Cool Racing Ligier JS P320-Nissan: “It’s amazing to be in Cool Racing and my engineer Max and Nico Lapierre are doing an amazing job for preparing such a good car. Then they are just teaching me all the stuff that they have been experiencing in their careers, so it’s just amazing to be able to learn from those people.

“I really, really like Monza. It’s a super high-speed track and there are some good opportunities for passing in the race. So, it will be interesting and I’m looking forward to it.”

Christian Ried – no77 Proton Competition Porsche 911 RSR-19: “It was a great qualifying first and the car was super good. The guys did a great job on the set up and also Gimmi (Bruni) and Lorenzo (Ferrari) coached me quite well. And you know Monza is a special place as I did my first race here in ‘99, so it’s nice to be here on pole.

“The level of the championship is amazing, the cars are great, and the lineups are super strong. The Ferrari won in Le Castellet, the Aston Martin in Imola, so I hope it’s the Porsche tomorrow.”