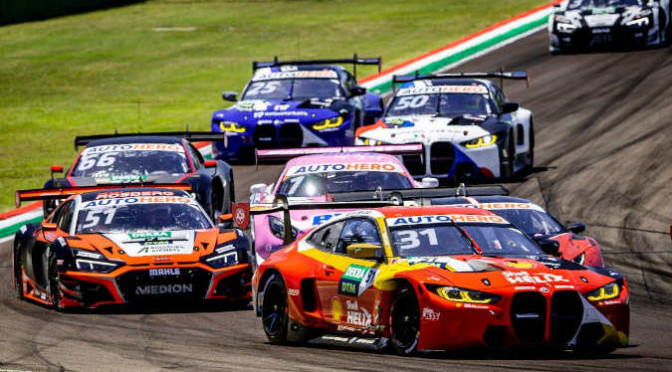 The home round for DTM champions Marco Wittmann and Maximilian Götz, the debut for Turkish driver Ayhancan Güven with Ferrari, the return for “Mr. Norisring” Bruno Spengler together with Hans-Joachim Stuck and Prince Leopold of Bavaria in DTM Classic: this weekend’s DTM Norisring powered by BMW M (1 till 3 July) is the summer highlight of the long-standing series. In 1984, its inaugural season, DTM already raced at the 2.3 kilometres long street circuit in Nuremberg. Now, a jubilee is coming up with the 49th DTM race on Saturday and the 50th on Sunday.

DTM with its record field and the race cars from Audi, BMW, Ferrari, Lamborghini, Mercedes-AMG and, for the first time, Porsche, combined with the talent pool DTM Trophy and DTM Classic with the touring cars from earlier years, BMW M2 Cup, TCR Europe Series and Ferrari Club Deutschland Racing Series: six race series adding up to a veritable motorsport festival in the “Franconian Monaco” from Friday to Sunday with a total of twelve races. Spectators can not only look forward to a lot of on-track action, but also to the unique atmosphere in the paddock and at the Dutzendteich lake, including autograph sessions, pit walkabout and an attractive stage and event programme, and that in fine summer weather with temperatures up to 30 degrees.

A new element at Norisring is awaited with excitement. As an exception, the two DTM qualifying sessions will be held in two groups. Thus, the DTM organisation ITR ensures that every driver gets a fair chance of a lap of the 2.3 kilometres long track that is as clear as possible to achieve his personal best time and the best possible starting grid position as a result.

Eight months after the 2021 DTM season finale at the same venue, the question is: who will be going into the eight-week summer break as the “half-time champion”? South African Sheldon van der Linde (80 points) is starting the fourth of this season’s eight DTM race weekends as the points’ leader with his Schubert BMW, followed by Italian Mirko Bortolotti (68) with the GRT Lamborghini, Swiss Nico Müller (62) with the Rosberg Audi, Austrian Lucas Auer (60) with the WINWARD Mercedes-AMG and three-time DTM champion René Rast (GER/49) with the ABT Audi, who celebrated his first race win of the season at Imola.

Reigning champion Maximilian Götz in particular is hoping for a turnaround in front of his home crowd. The member of the organising Motorsport Club Nürnberg (MCN) has only scored five points with the WINWARD Mercedes-AMG so far. For the 35-year-old from nearby Ochsenfurt, there would hardly be a better venue for the turnaround than Norisring. The second local hero is Marco Wittmann. The two-time DTM champion got himself in excellent shape, having scored his first podium finish with the new BMW M4 run by Walkenhorst Motorsport at Imola most recently, moving up to ninth place in the standings as a result. In 2018, the driver from Fürth scored his first home win. “Thinking about that moment still gives me goosebumps, so epic, so special, so emotional!”

For the jubilee at Norisring, Red Bull AlphaTauri AF Corse is bringing in a rookie: Ayhancan Güven. The 24-year-old driver from Turkey, the 33rd country in DTM history, is standing in for New Zealander Nick Cassidy in the Ferrari 488. For Güven, it is a one-off participation.

Meanwhile, Bruno Spengler, Hans-Joachim Stuck and Prince Leopold of Bavaria are making it a grand reunion at Norisring. Canadian Spengler has earned himself the “Mr. Norisring” moniker with the record of five DTM race wins at the long-standing circuit while “Strietzel” Stuck and “Poldi” have been part of the history of the circuit around the coveted stone grandstand since the 1970s. In the second race weekend of the DTM Classic Cup with former DTM cars from the years between 1984 and 2007, Spengler and “Poldi” will both be racing a BMW while Stuck will be behind the wheel of an Audi. With Kris Nissen (BMW), Marc Hessel (BMW) and Stefan Mücke (Opel), six former DTM heroes in total will be racing in DTM Classic.

The two DTM races get underway at 1.30pm on Saturday and Sunday, ProSieben is broadcasting live from 1pm on both days. Qualifying sessions and the races of all series can also be watched on the streaming portal DTM Grid (grid.dtm.com). Tickets for the unique motorsport spectacular in Nuremberg can still be ordered in pre-sale until Thursday at tickets.dtm.com, +49 1806 991166 and ebay.de and during the event at the ticket sales booths.