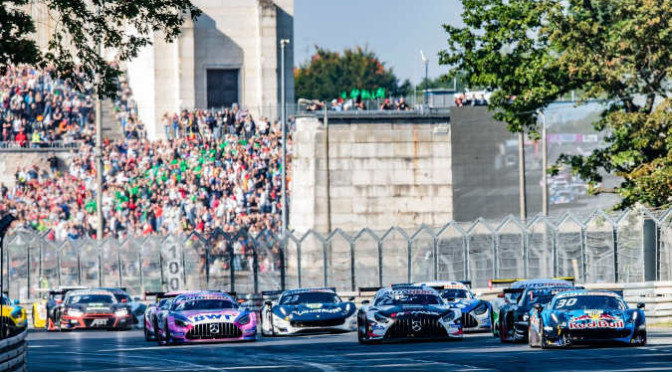 Anticipation for the season highlight at Norisring (1 till 3 July) is huge, not just for local hero Marco Wittmann. “I am massively looking forward to race at Norisring, in front of my home crowd and with this great atmosphere, that is always something really special,” the two-time DTM champion from Fürth said during the press conference of the organising Motorsport Club Nürnberg (MCN). His podium finish at Imola most recently is giving the BMW works driver additional momentum for his home race. The long-standing series with its record field and fascinating race cars from Audi, BMW, Ferrari, Lamborghini, Mercedes-AMG and, for the first time, Porsche is in the centre of the attention once again. With the talent pool DTM Trophy, the historic race cars from DTM Classic as well as TCR Europe Series, BMW M2 Cup and the Ferrari Club Deutschland Racing Series, no less than six race series make for a packed schedule and varied and entertaining motorsport at the 2.3 kilometres long track.

“The DTM package with six race series is highly interesting, the schedule is packed: without any doubt, an attractive package for the spectators,” said Jürgen Schielein, deputy chairman, MCN. “On top of that, there are the family-friendly activities in the paddock and the special flair at Norisring. Ticket sales has been pretty good so far and the weather forecast includes sun and temperatures of over 25 degrees, so we can prepare for a hot Norisring weekend.” Until and including Thursday (30 June), tickets are available in pre-sale from tickets.dtm.com, +49 1806 991166 and through ebay.de. Ticket sales points at the circuit are open during the race weekend.

In the paddock, the futuristic DTM Electric Design Model will be on display again. “Currently, DTM Electric is one of the biggest projects in motorsport worldwide, a long-term project with the aim of changing the motorsport world and having an influence on mobility of the future,” said Martin Tomczyk during the press conference. With the clear goal of putting a stronger focus on sustainability and the environment, the DTM representative brand & sport of the DTM organisation ITR indicated that hard work is being done at the moment to be running with 100 percent fossil-free fuel in DTM and DTM Trophy in 2023 already. Moreover, the former DTM champion declared: “Together with the City of Nuremberg and MCN, Norisring is to become the first carbon-neutral DTM event as a lighthouse project.”

As the DTM points’ leader, South African BMW driver Sheldon van der Linde (Schubert Motorsport) will be racing at Norisring. Italian Mirko Bortolotti (GRT Lamborghini) is second in the standings from Swiss Nico Müller (Rosberg Audi). Marco Wittmann is currently seventh in the championship. Wittmann is not just hoping for a successful weekend for himself. The 32-year-old is also rooting for his father Herbert and his brother Nico who are racing a classic BMW touring car in the DTM Classic Cup. “In DTM Classic, there are really great race cars in the field that I always love to watch and to listen to,” two-time DTM champion Marco Wittmann said.