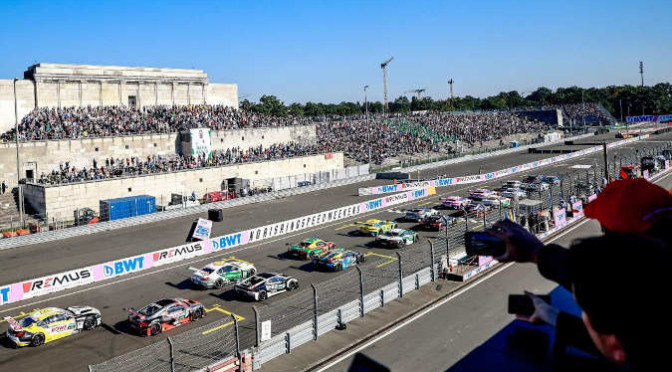 An unimpeded sprint to pole position: during the DTM Norisring powered by BMW M event, the record field of the long-standing race series will be running qualifying in two groups as an exception. Like this, the DTM organisation ITR is creating conditions for all 29 drivers to achieve a lap that is as clear as possible in the dash for pole-position and the best starting grid position at the only 2.3 kilometres long street circuit in Nuremberg. At the first weekend of July (1 till 3 July), DTM is running the seventh and eighth race of its season in the Franconian metropolis. Tickets for the traditional motorsport spectacular with the high-class DTM, the talent pool DTM Trophy and the historic DTM Classic Cup, the BMW M2 Cup one-make series as well as TCR Europe Series and Ferrari Club Deutschland Racing Series are available online at tickets.dtm.com, from the hotline +49 1806 991166 and at ebay.de.

“Fair conditions, that is the goal of this exception,” Frederic Elsner, director event & operations, ITR, underlines. “Because of the luxury problem of the high number of cars, we were forced to split. With the current format, every driver gets the best possible conditions to achieve fast lap times at this short race track. Reversing the order of the two groups for second qualifying on Sunday ensures fairness. Spectators can look forward to an open, unimpeded battle for pole position.”

The procedure is as follows: at the start of the event, the field is split up into two qualifying groups (A and B), based on the points in the drivers’ standings valid at that moment, and will not be changed anymore for the qualifying sessions on Saturday and Sunday. The drivers in the odd positions in group A, those in the even positions in group B. On Saturday morning, Group A will first run the 20-minute qualifying A, followed by qualifying B with an identical duration after a five-minute break. The drivers with the fastest time of each group will be starting from the front row while the driver with the best time, as usual, will be allowed to choose the side for pole position and the drivers from his group will be lining up behind him. The championship points for qualifying (3-2-1 points) will, as usual, be attributed for first to third place on the grid. For second qualifying on Sunday, the order will change with Group B going out first, followed by Group A.

“There was a vivid and good interaction with the drivers and teams,” Layla Wagner, manager competition & technology, ITR and therefore, among others, responsible for the regulations, reports. “Under guidance of race director Scot Elkins, the qualifying situation at Norisring was discussed with everyone involved and a fair solution was found in the end.” The resulting bulletin has already been approved by the Deutscher Motor Sport Bund (DMBS) as the responsible sporting authority.